Serving more than 6 billion customers a year at its 6,407 locations, Taco Bell is a leader in the fast food industry. Since its birth in 1962, the Bell has always differentiated itself from other chains. Whether it’s simply by serving tacos rather than cheeseburgers or launching an out-of-this-world publicity stunt (literally), it has always found a way to stand out.

Check out these 20 Taco Bell facts that you probably didn’t know.

It didn’t start with tacos. 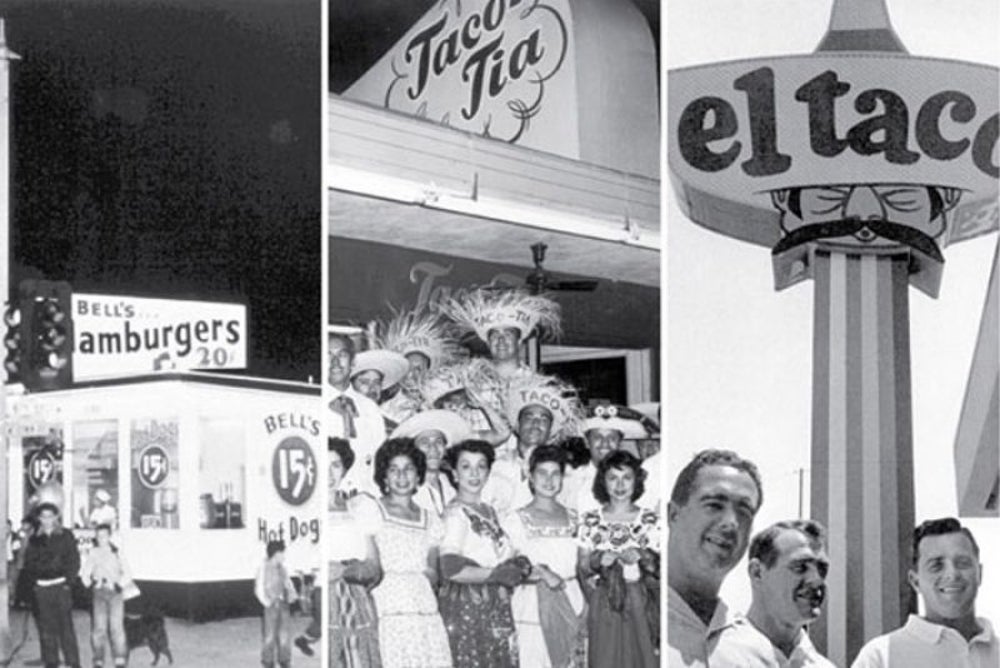 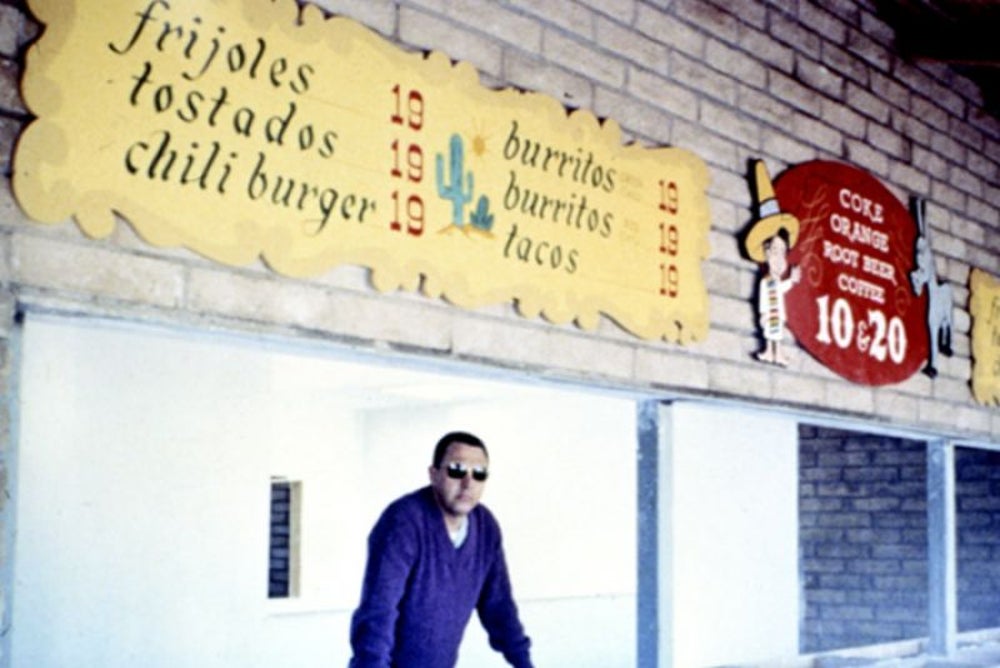 Image credit: Taco Bell Archives
You think $1 for a taco is cheap? Think again. In its early days in the 1960s, Taco Bell’s menu only offered a limited number of classic options including tacos, burritos, frijoles and tostadas. Each item cost only $0.19, according to Huffington Post. 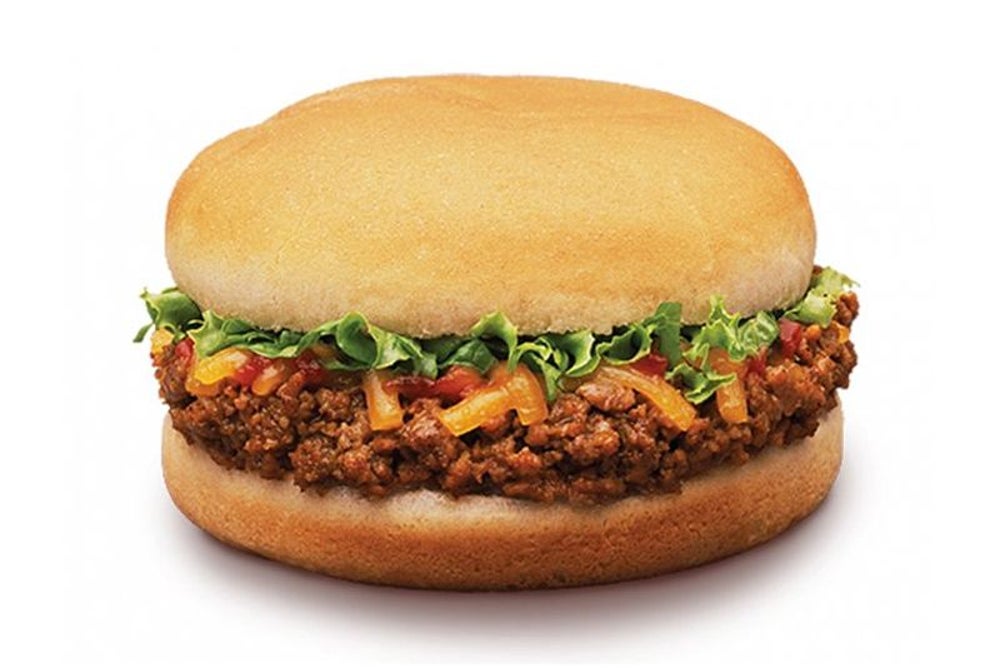 Taco Bell didn’t always “think outside the bun.” Along with tacos, its original menu featured tacos, burritos and chiliburgers.

The chiliburgers were eventually taken off the menu. 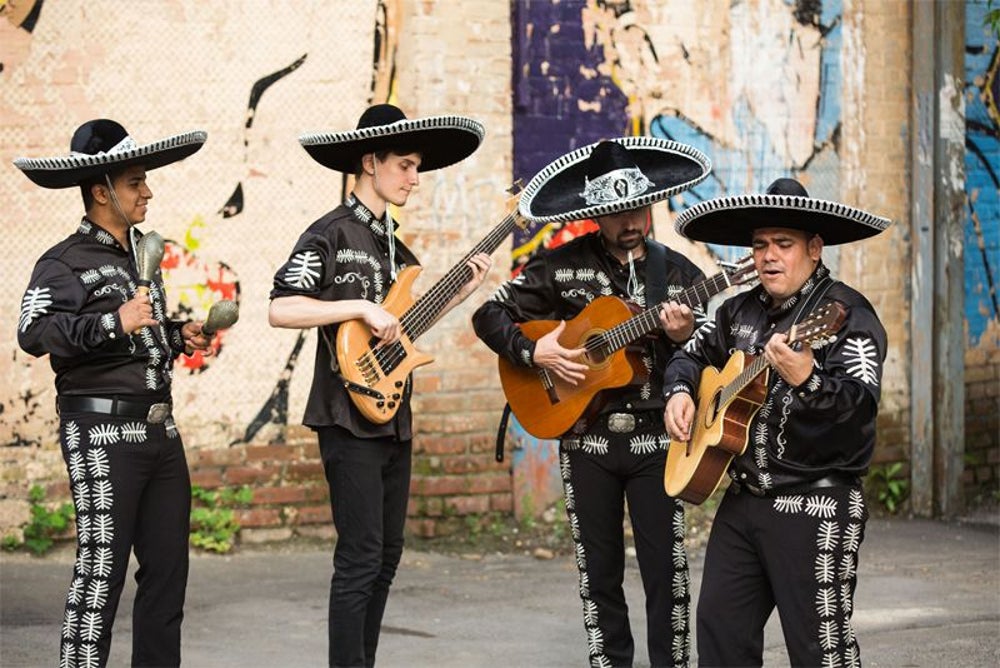 Image credit: Shutterstock.com
The first Taco Bell was an outdoor hangout. It had a walk-up window and no indoor seating. Instead, people could sit around fire pits on the patio and listen to live mariachi bands.

PepsiCo used to own Taco Bell. 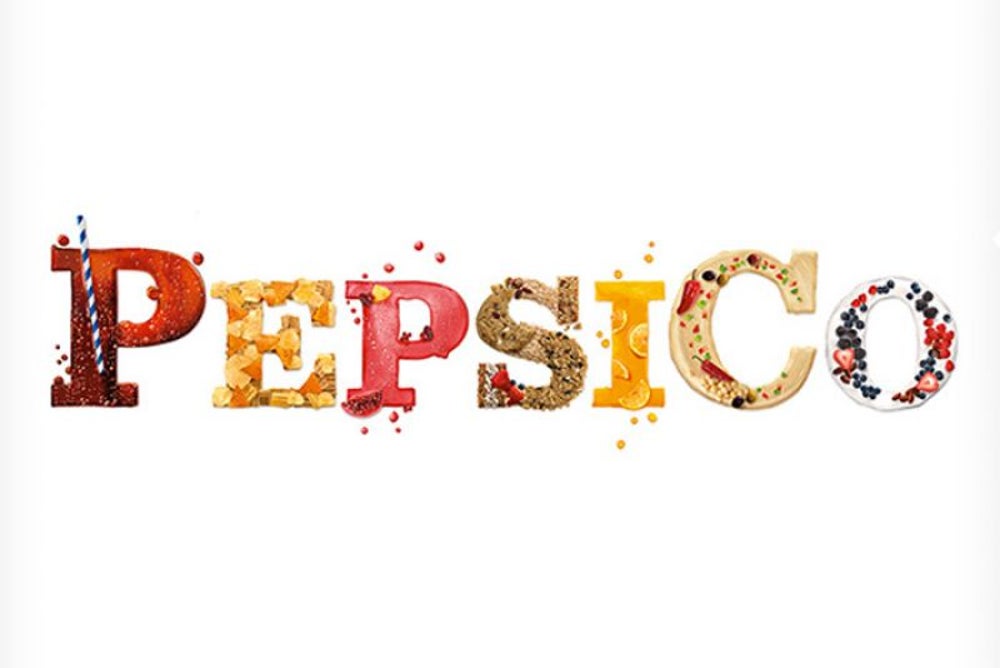 Image credit: Pepsico
PepsiCo acquired Taco Bell in 1978, along with a number of other fast-food chains such as KFC and Pizza Hut that were under the Yum! foods umbrella -- a subsidiary of PepsiCo until 1997.

Taco Bell was the first fast food chain to hire women as managers. 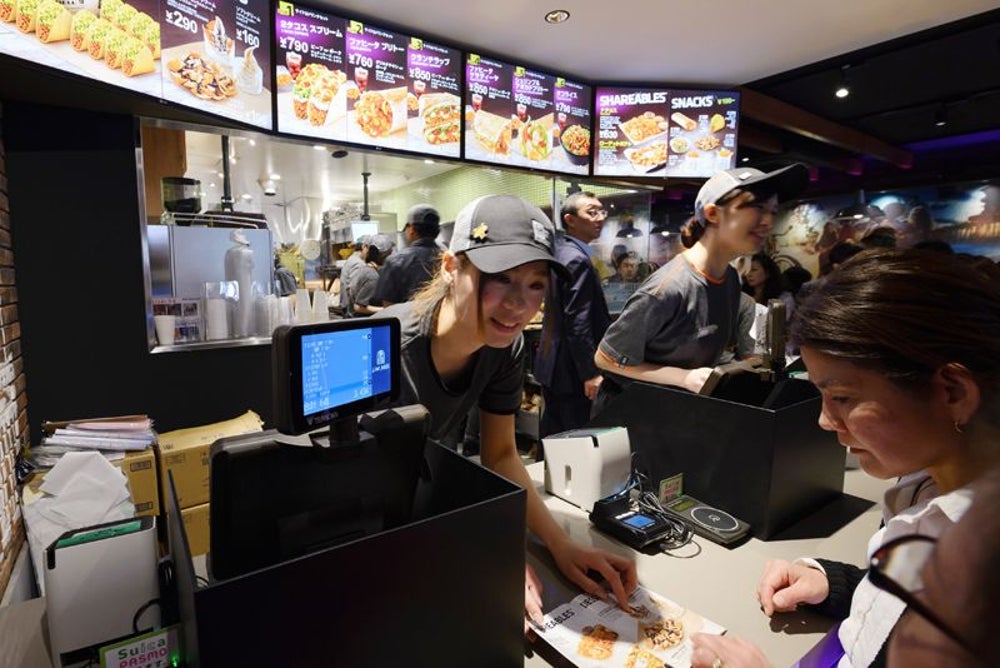 Founder Glen Bell spent much of his childhood helping his aunt run her bakery in Washington. Bell valued working with women.

In its earlier days, former director of operations John Gorman recalled, “There weren’t enough [managers] to go around [and] they were all men.” Taco Bell was “the first chain to hire women managers to run the stores,” Gorman said. 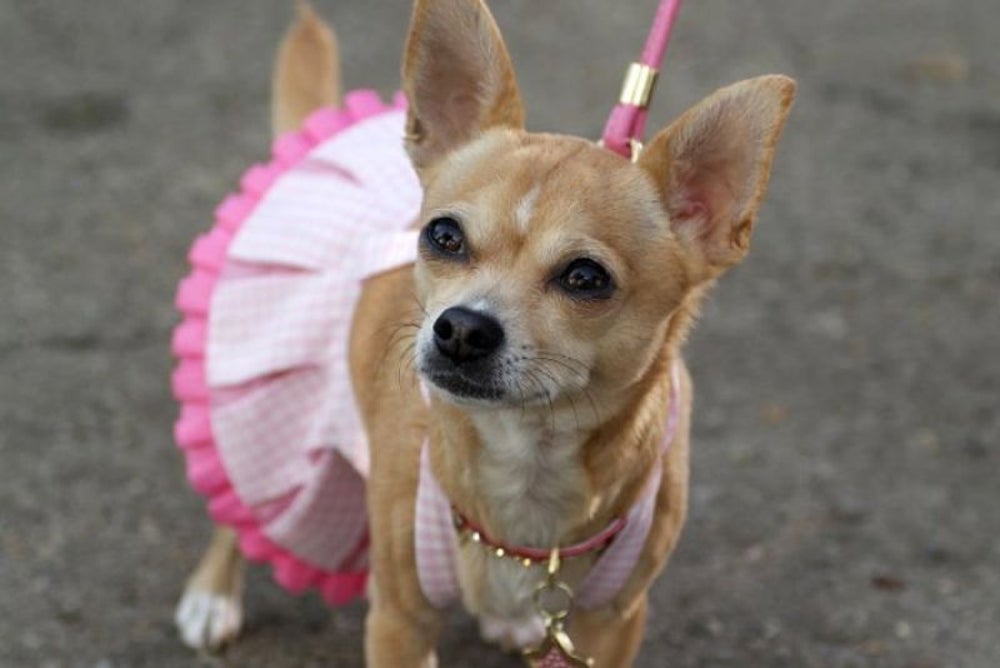 As the face of Taco Bell in the late 1990s and early 2000s, the chihuahua Gidget popularized the line “Yo quiero Taco Bell,” used in a number of commercials and ad campaigns.

Although the ads were a hit -- we all recognize that little face -- Taco Bell’s sales remained stagnant and the company pulled the plug on the campaign in 2000.

That didn’t stop Gidget’s career though. The 12-pound pooch went on to star in Legally Blonde 2: Red, White and Blonde and a series of Geico commercials. 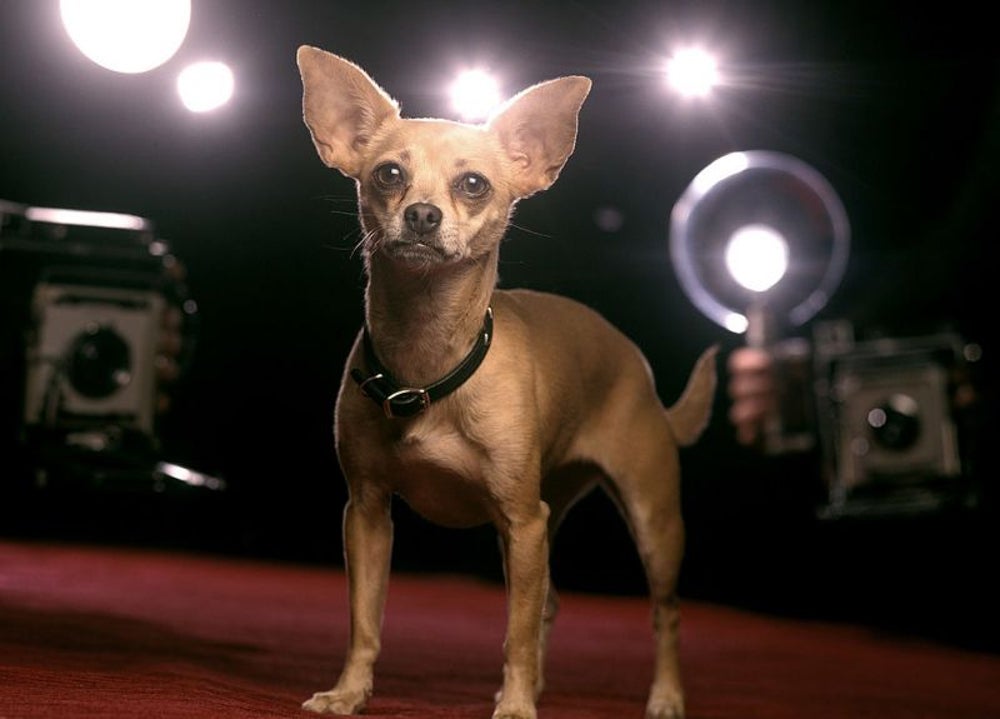 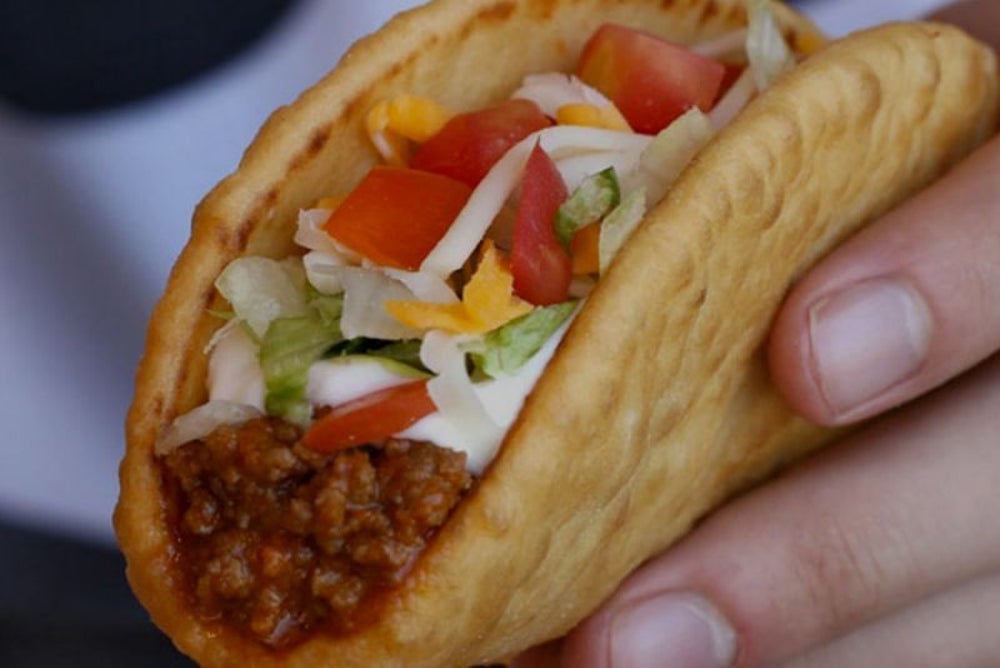 Image credit: Taco Bell
In 2011, an Alabama law firm sued the fast food giant claiming its tacos only had 35 percent beef. Taco Bell shot back with full-page ads retorting the accusation. As the facts rolled out, Taco Bell’s beef was found to have 88 percent beef and 12 percent “secret recipe.” 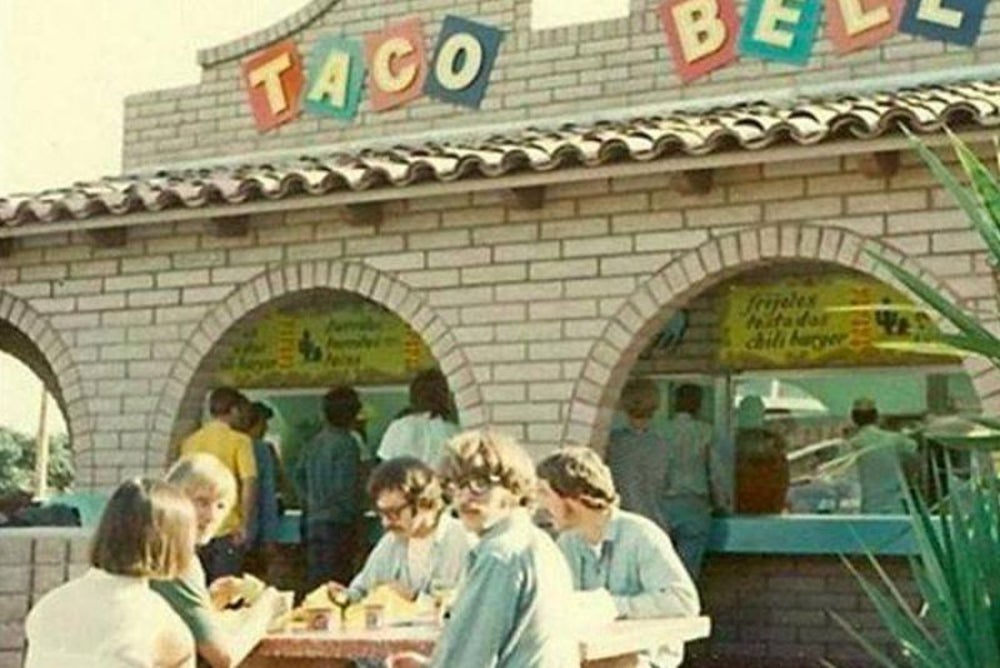 Since the beginning of its time, Taco Bell has always been a spot that attracts a variety of faces.

A 1968 photo reveals the band Creedence Clearwater Revival’s stop to Taco Bell. More recently, Macaulay Culkin has been spotted lunching at the fast-food joint, even alone on Christmas Day. 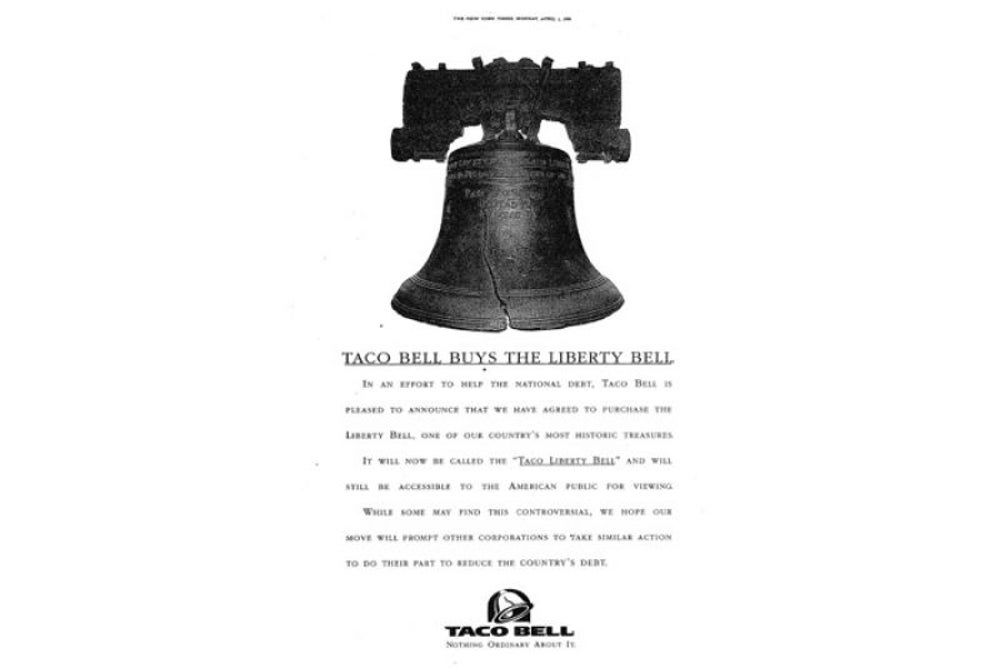 By noon that day, Taco Bell announced that the ad was a joke and that the Liberty Bell was never “up for sale.” That didn’t stop angry protestors from swarming a number of Taco Bell locations. Ultimately, Taco Bell pledged to pay $50,000 to the upkeep of the monument at an attempt to calm angry Americans.

An angry college basketball star got stuck in a Taco Bell drive thru window. 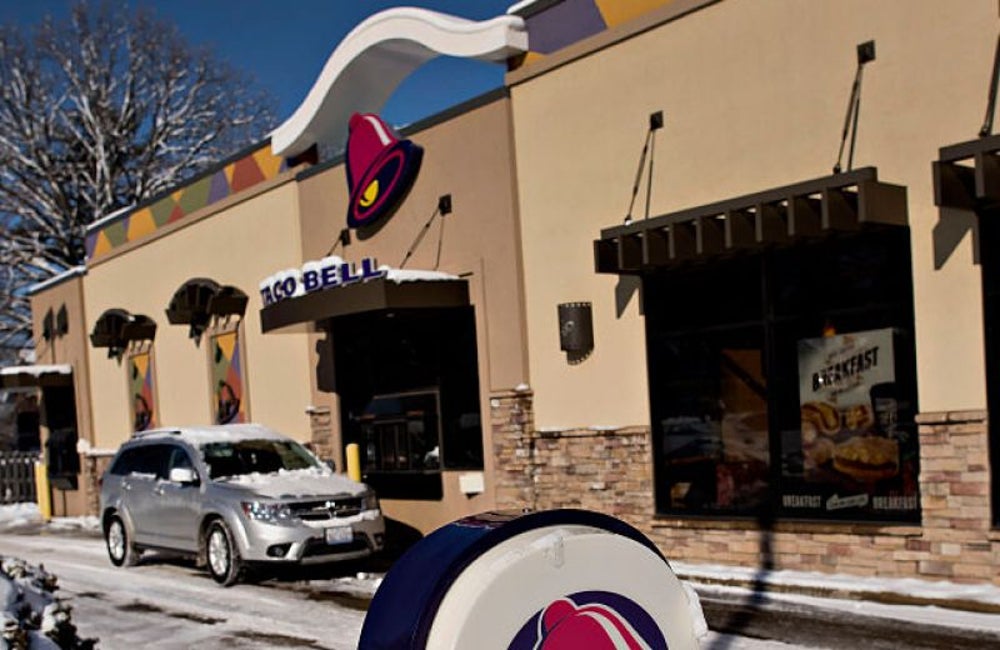 In 1999, University of Kansas football star Dion Rayford got so angry at Taco Bell food servers for forgetting a chalupa in his order that he tried to crawl through the drive-thru window.

The 6-foot-3-inch, 260-pound senior defensive end got stuck in the window. After police arrived to the scene and removed him from the window, Rayford faced charges for disorderly conduct, an open container of alcohol and damage to private property.

Free tacos were offered if a piece of a space station crashed on a target. 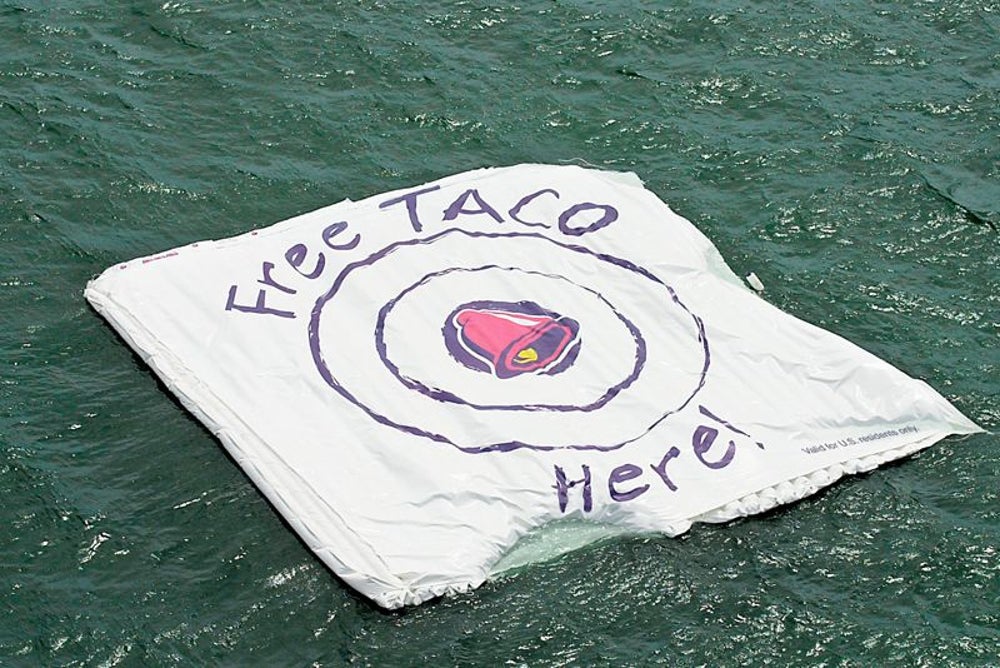 In 2001, when Russia’s Mir Space Station deorbited and headed to crash in the southern Pacific Ocean, Taco Bell set up a floating target. The target read: “Free taco here!” If even a fragment of the station landed on the target, Taco Bell promised every person in the U.S. one free taco.

Unfortunately for Americans, none of Mir landed on the target. 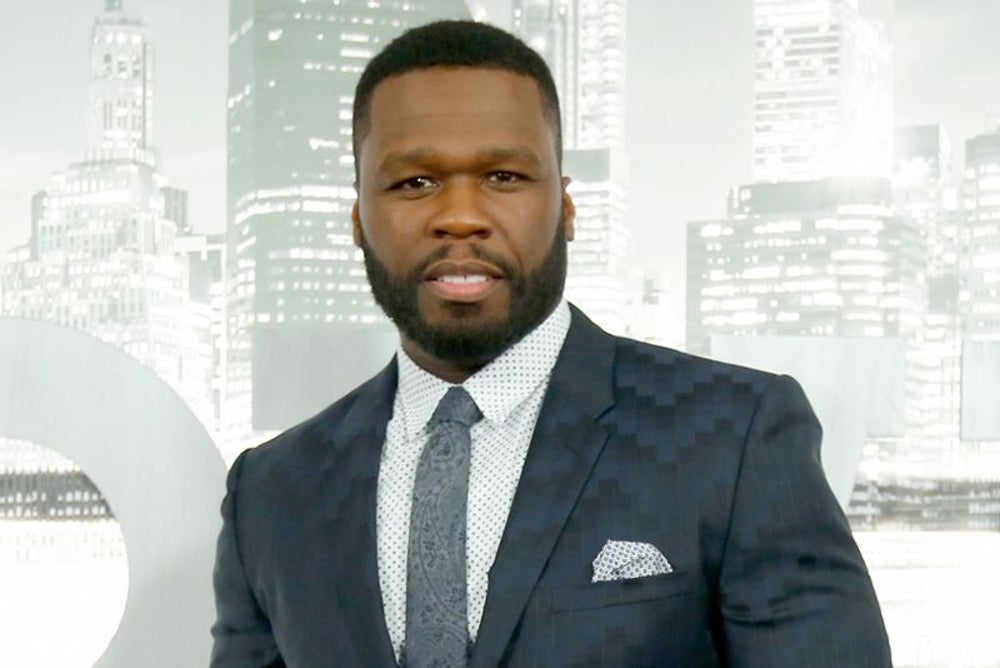 In 2008, rapper 50 Cent sued Taco Bell claiming the company used his name and image without his permission to promote its low-cost menu items.

As part of the “Why Pay More?” campaign, the company wrote a letter addressed to 50 Cent, asking him to change his name to “79 Cent,” “89 Cent” or “99 Cent.” Rather than sending the letter to the rapper, the letter was sent to a number of media and publicity firms.

Initially, 50 Cent sought $4 million in damages for the unauthorized endorsement, but the case was settled confidentially.

The company was almost represented by Billy Mays. 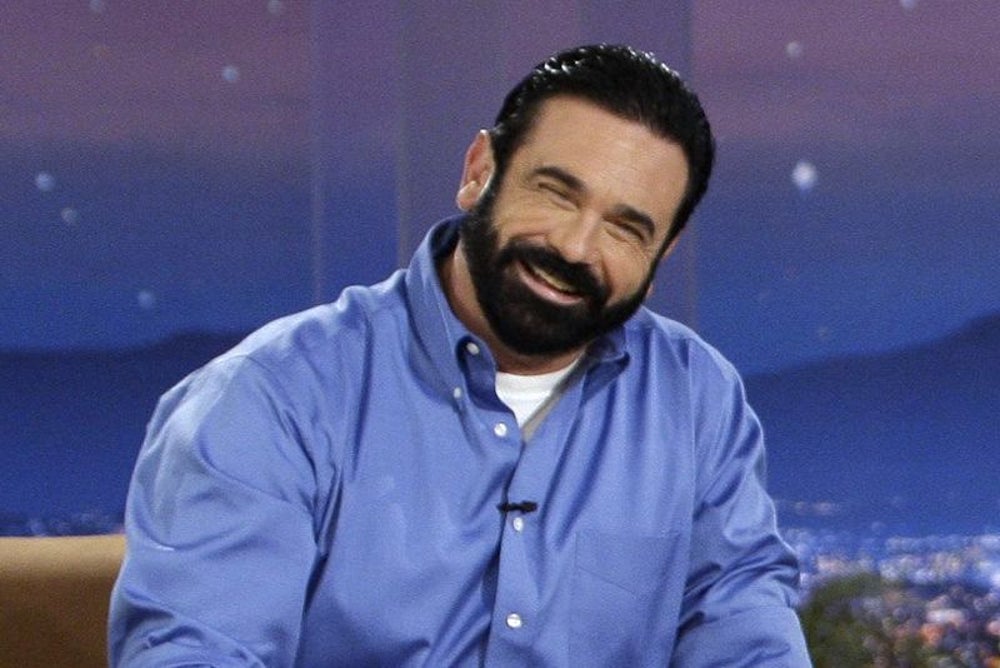 Image credit: NBC
Infomercial extraordinaire Billy Mays signed a deal to be the official spokesperson for Taco Bell in 2009. Shortly before filming, Mays died due to heart failure.

Taco Bell petitioned the government to bring back $2 bills. 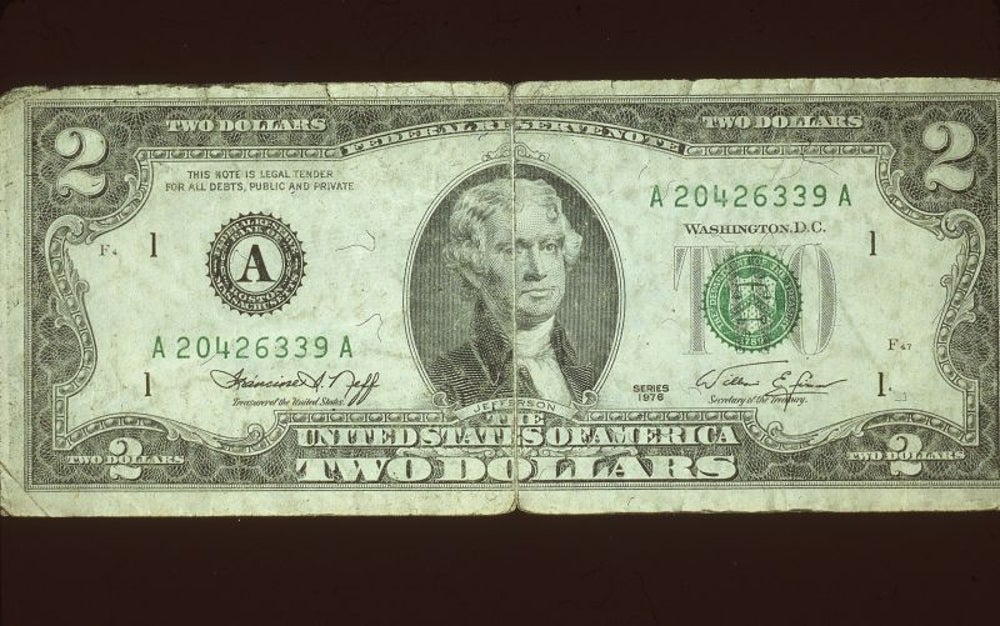 In 2010, Taco Bell wrote the Federal Reserve a request to start printing $2 bills again. In an effort to promote its $2 menu and “rally the nation around the new buying power of $2,” said former CMO David Ovens, Taco Bell created an online petition on Facebook and encouraged customers to sign.

To answer your question: no, the Federal Reserve didn’t end up taking the PR stunt seriously.

Taco Bell no longer has a kids’ menu. 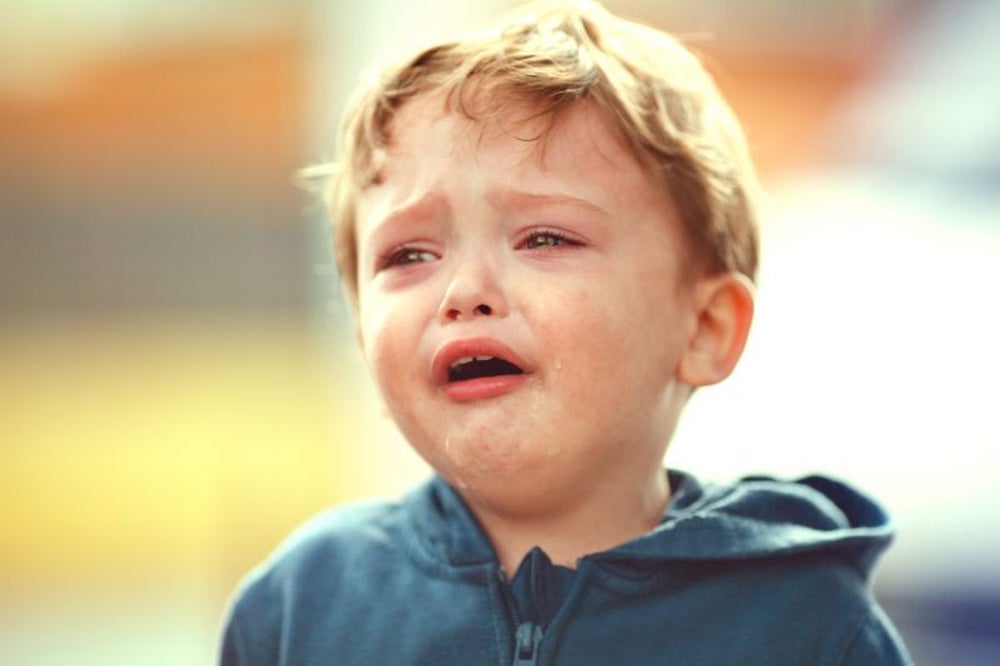 Image credit: www.ginomaccanti.com | Getty Images
As the first national fast food chain to stop offering a kids’ menu, Taco Bell aims its focus on people in their 20s and 30s, according to NBC. As a means to rebrand itself as a “Millennial edgy brand,” Taco Bell’s kids’ menu was dropped in 2013. 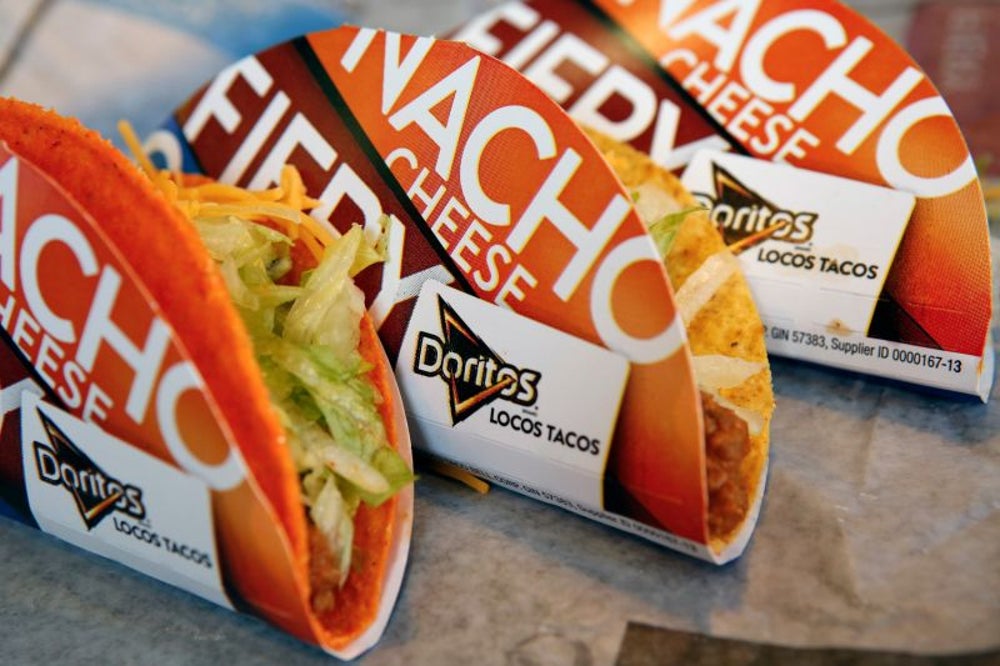 The success sparked from the wildly popular menu item allowed Taco Bell to employ more than 15,000 new workers in 2012, the company claimed. 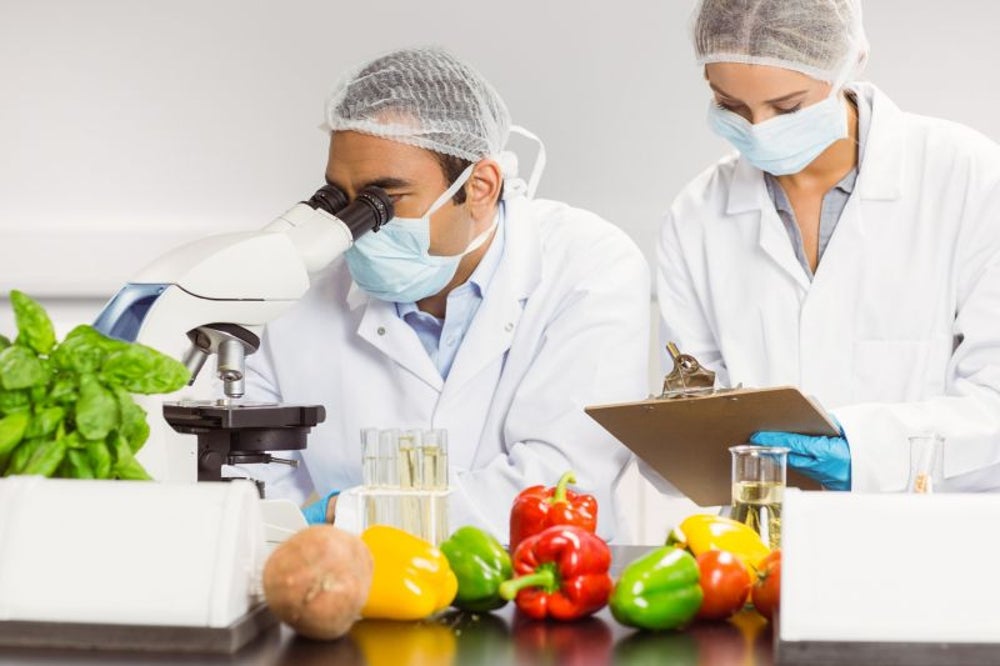 Image credit: Shutterstock
Selling nearly 1 million Doritos Locos tacos a day in 2012, it’s no wonder it took the fast food giant almost two years to perfect the concoction. The execution of the hit menu item posed a challenge for developers in design and recipe. They tested out over 40 different recipes before finally getting it right. 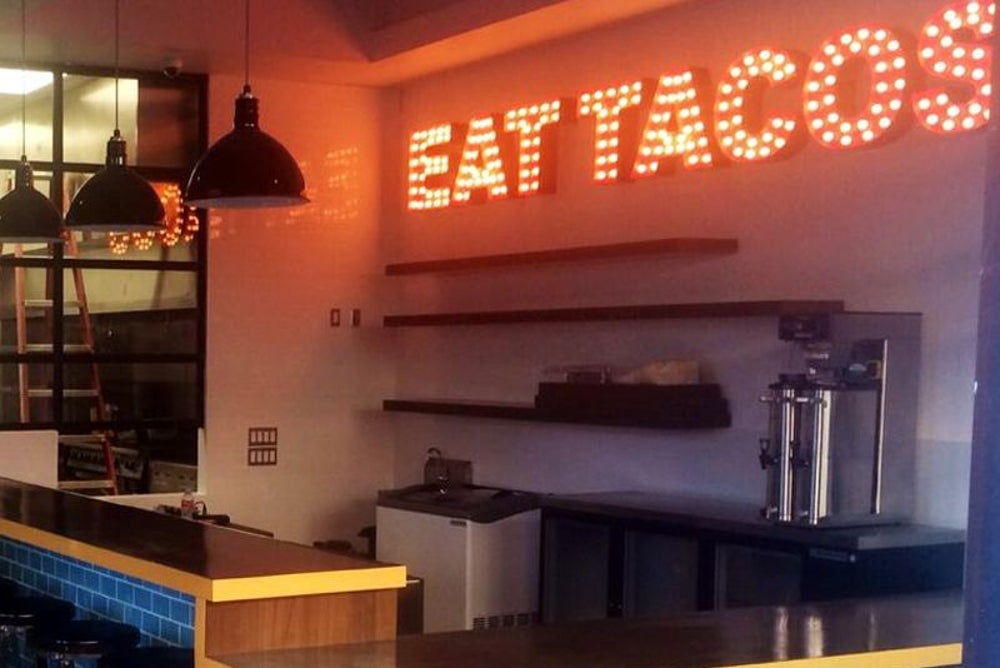 In 2014, Taco Bell spin off U.S. Taco Co. was launched in Huntington Beach, Calif. But the “fast casual” restaurant -- with a goal to attract higher-income foodies offering gourmet tacos, french fries and milkshakes -- was short-lived.

With complaints about the quality of its food, pricing and its inability to obtain a liquor license, U.S. Taco Co. shut down in 2015 after just one year of operating.