The online invitation company is all about finding ways to 'bring people together face-to-face to help create life's most memorable moments.'
Next Article

It may seem like an simple concept -- creating virtual invites -- but it is anything but. To stay competitive, the company, which has doubled its headcount in the past five years, focuses on keeping its product offerings fresh and staying competitive. To achieve this, most of its 120 employees work at its new headquarters in downtown Los Angeles -- a relaxed office with a focus on community and fun.

“Our company mission statement is to bring people together face-to-face to help create life's most memorable moments,” says Kristy Gharabally, Evite’s director of marketing and communications. “I think we achieve that just by nature of our open floor plan and a comfy, casual, very approachable environment that the team has worked to create collectively.”

The L.A. office has a communal meeting area near the kitchen with a sectional sofa and bean-bag chairs, designed to give off a “living room feel.” There are also plenty of activities, organized by Evite’s Employee Experience Team, designed to foster company culture. Examples of these initiatives include weekly company-sponsored spin classes, themed costume parties, employee art installations and even cross-department group lunches, which the Evite teams refers to as “blind dates.”

Click through the slideshow to take a tour of Evite’s Downtown L.A. office and learn about how the event-centric company brings its own people together. 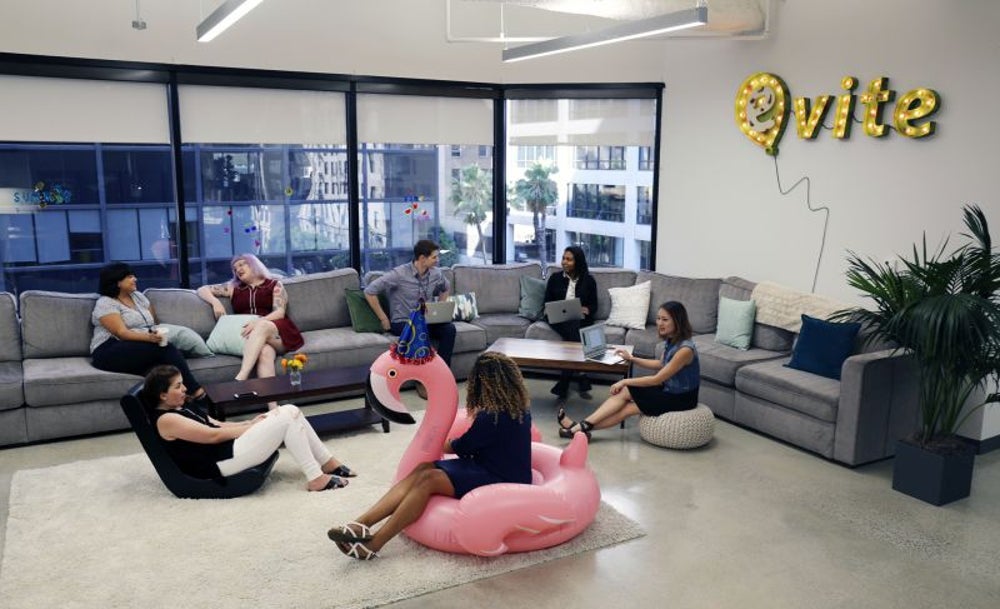 Every conference room and common area in the Evite office is named after an L.A. landmark event venues, and the central, communal space adjacent to the kitchen is known as the Hollywood Bowl.

People have casual meetings and conversations in the Hollywood Bowl throughout the day over coffee or snacks, as well as take breaks there at lunchtime.

“It’s a nice, open casual social opportunity for people to interact with people from across the organization,” Gharabally says.

In early February, the Evite held an all-company summit, which brought in its remote employees from New York and Chicago, and the entire team congregated in this area.

“We were very prescriptive about not having anyone mic’d,” Gharabally says of the casual, intimate nature of the summit. “They wanted it to have more of a living room feel, and in fact, part of our sessions were called fireside chats, where we went around, team to team and talked about different priorities.”

Other rooms in the office are named Skybar, The Wiltern, El Rey, The Palladium, The Roxy, The Mint, The Greek and more. The company’s smaller phone booth lounges are named after L.A. museums.

Yes, there is a Ping-Pong table -- but for a good reason. 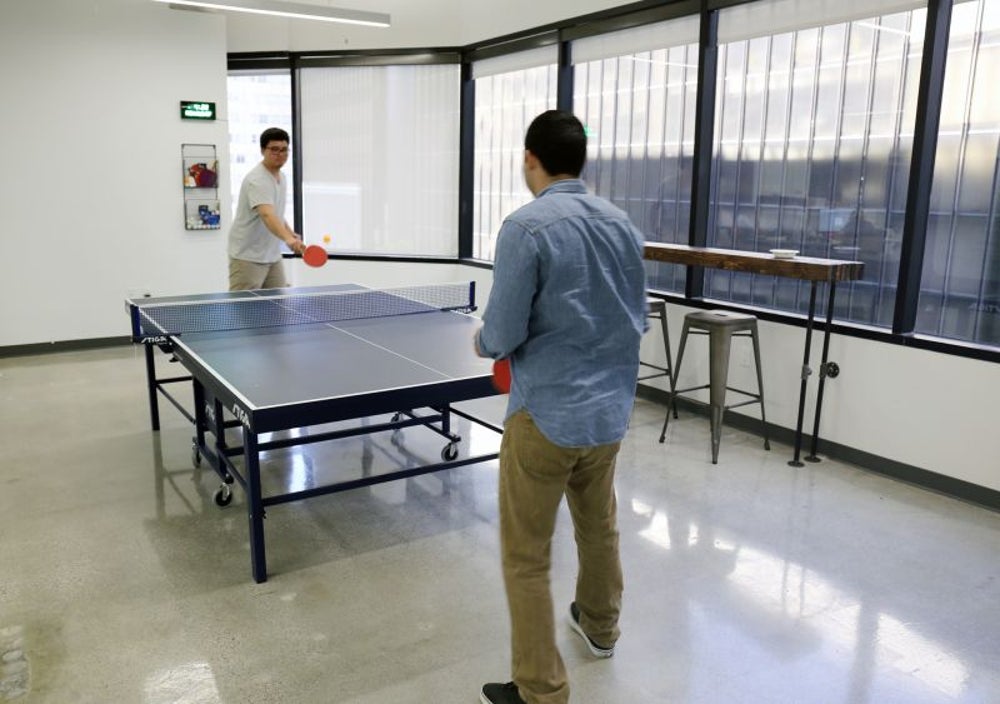 Despite the association between Ping-Pong tables and startup offices, Evite made sure to devote a room to one in its expanded headquarters.

The company used to have a Ping-Pong table back in its West Hollywood office, back when fewer than 40 people worked there. The room in the Downtown L.A. office where the table lives is named Whisky a Go Go, after the famous West Hollywood music venue.

“We’re pretty serious about it,” Gharabally says, explaining that Evite employees frequently hold table-tennis (that’s what the “more serious players” call it) tournaments and even bring in their own special paddles for a competitive advantage.

Related: What This Ping-Pong Robot Tells Us About the Next Phase of Human-Robot Interaction

“Have fun and create fun” is one of Evite’s core values, and table tennis provides a mental break from work and allows team members to socialize across departments and get a bit of exercise.

“We have a very nice table, and we always get reminded,’ Don’t bring food or drink in there, this is an expensive table!’” she adds. “‘It’s not like something you’d find in your parents’ garage.’” 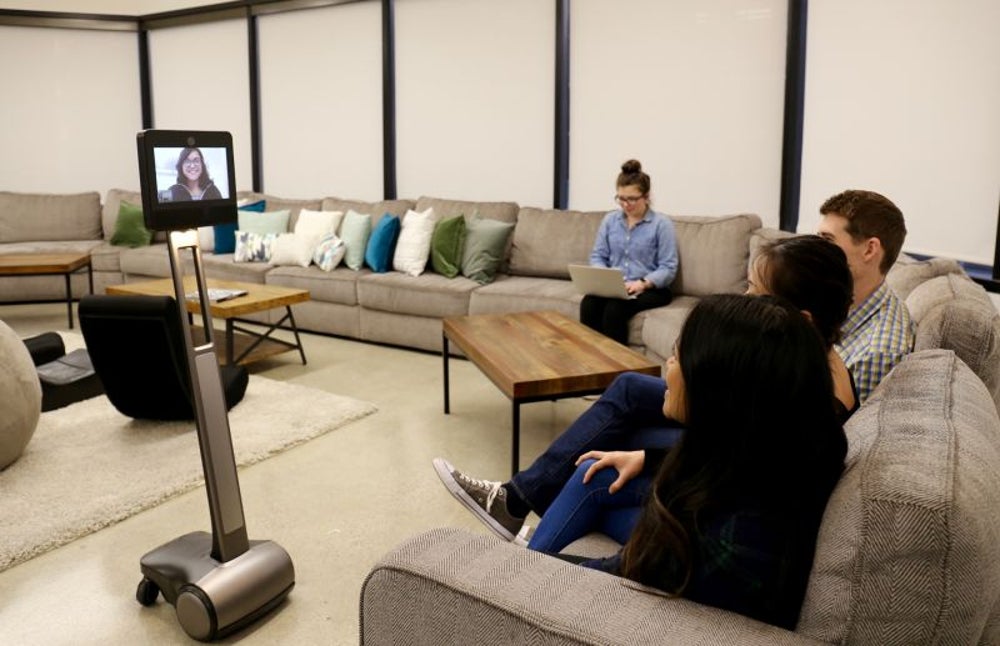 Evite CEO Victor Cho is interested in emerging tech, Gharabally explains. He’s based in San Francisco, which is why the L.A. office features telepresence video conference robots with remote steering to help embody remote employees who’d otherwise be joining meetings from a stationary screen or speakerphone.

Another tech feature Cho has prioritized is the company’s HTC Vive virtual reality system. The Observatory room, named after L.A.’s Griffith Observatory, is a place where employees and visitors can try a range of VR experiences, including one that makes the user feel like they’re underwater swimming with a whale. For guests, Gharabally says, the VR room adds a “wow factor” and serves as an icebreaker.

“Kind of like the Ping-Pong,” she says, “we have dedicated spaces to take a minute and go do something fun with your colleagues.”

A well-stocked and sometimes sentimental kitchen. 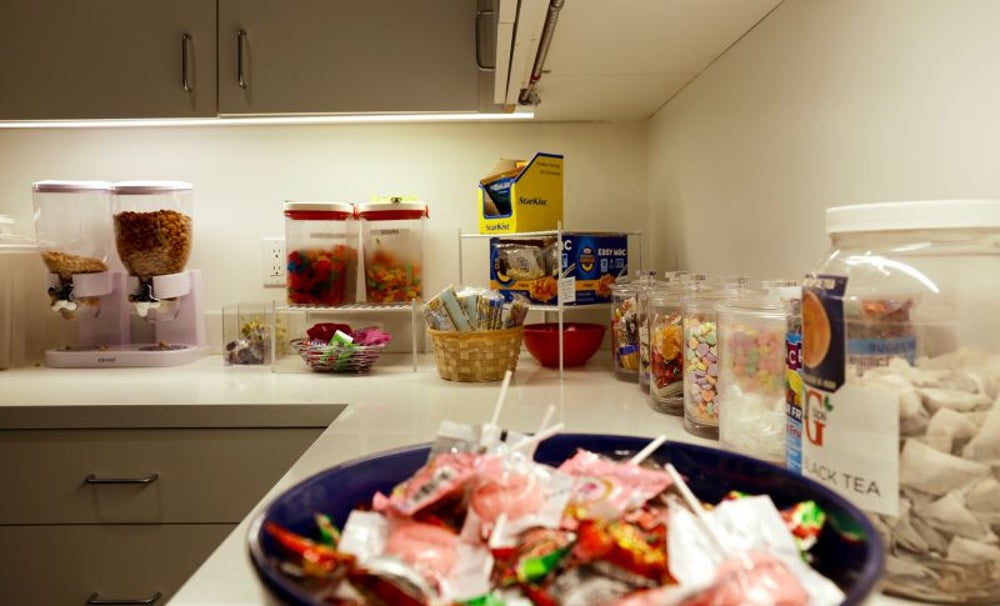 The Employee Experience Team, led by office managers Amy Tofte and Drew Holdwick, organizes everything from pizza Fridays to making sure that the office pantry is stocked with a variety of breakfast cereals, treats and fruits.

“Amy’s always touting, ‘there’s no shame,’” Gharabally says. “‘Whatever you want to eat is fine. If you need to eat junk, eat junk. Don’t judge anyone.’”

For a period over the past few months, Evite employees took turns introducing some of their favorite regional snacks to their colleagues. The Employee Experience team ordered it by request -- everything from maple fudge from Michigan's Mackinac Island to Twin Bings out of Sioux City, Iowa, along with a note about the employee's fond memories of the treat. 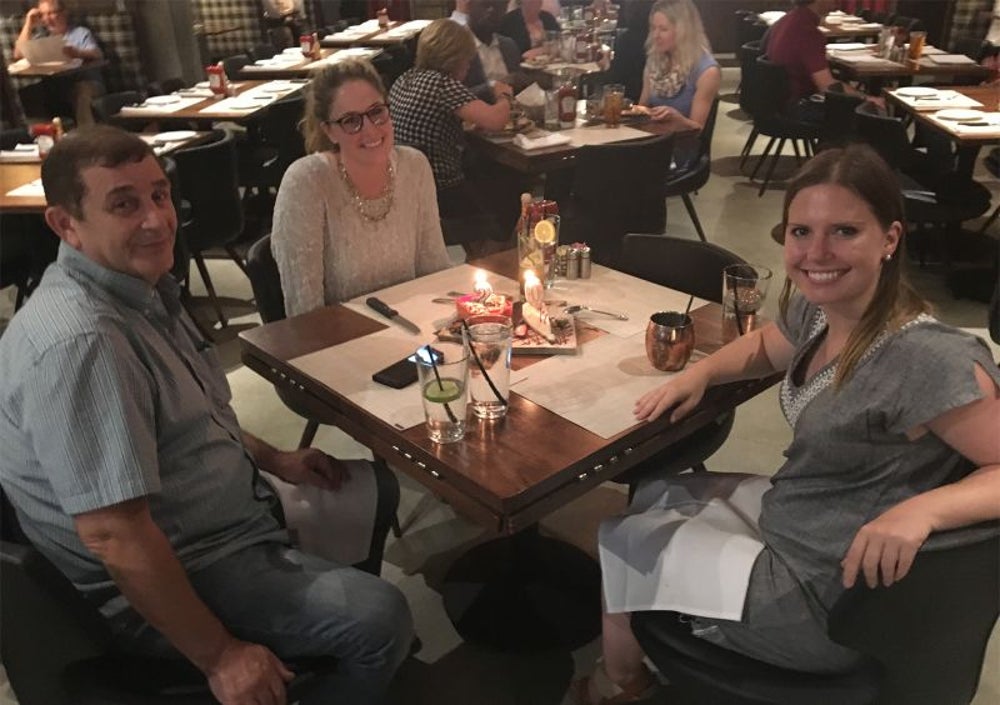 Evite’s HR department is called the Employee Experience Team, and one of their initiatives involves setting up coworkers on blind dates.

Well, not quite dates. What the team calls blind dates are actually lunches, where four to five employees from different teams and levels across the organization go out to lunch on the company dime.

“It’s just an opportunity to interact with people that you might not necessarily work with or know on a social level,” Gharabally says, noting that employees are free to talk about whatever they want, be it personal or work related, during the lunches. “I think everyone now in the company has experienced the blind dates, and we’re cycling through the next wave.”

Every group takes a photo during their lunch session, which the Employee Experience Team circulates in a company-wide newsletter.

“In the last two years we’ve added a lot of heads, and it just starts to get that you don’t know everyone as well when the team gets bigger,” Gharabally says. “This just breaks down barriers and makes for a great culture and environment.” 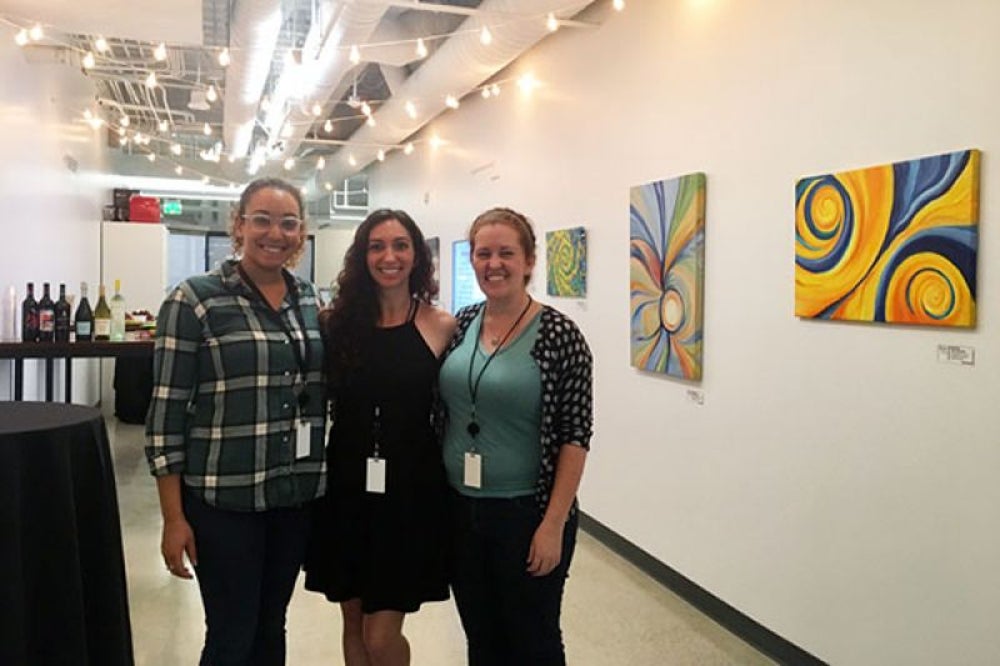 Evite’s Employee Experience Team has found that a lot of colleagues are artists or photographers in their spare time, so the company has had multiple showcases of these side projects. These have included everything from travel photos to painted skateboards.

The art walks are held in an area known as the Promenade, a hallway that connects one half of the circular office to the other.

“It’s like a legit art installation,” Gharabally says. “We make little placards with the artist’s name, and we host a happy hour with wine and cheese and snacks where people can mingle with the artists and hear about their pieces.”

The art walks happen during company hours, around 3:00 or 4:00, Gharabally emphasizes, so they don’t exclude parents who have to leave by 5:00 or 6:00 to pick up their kids from school our daycare.

“We’re very mindful of being inclusive with the team,” she says.

Evite is always looking for an excuse to throw a party. 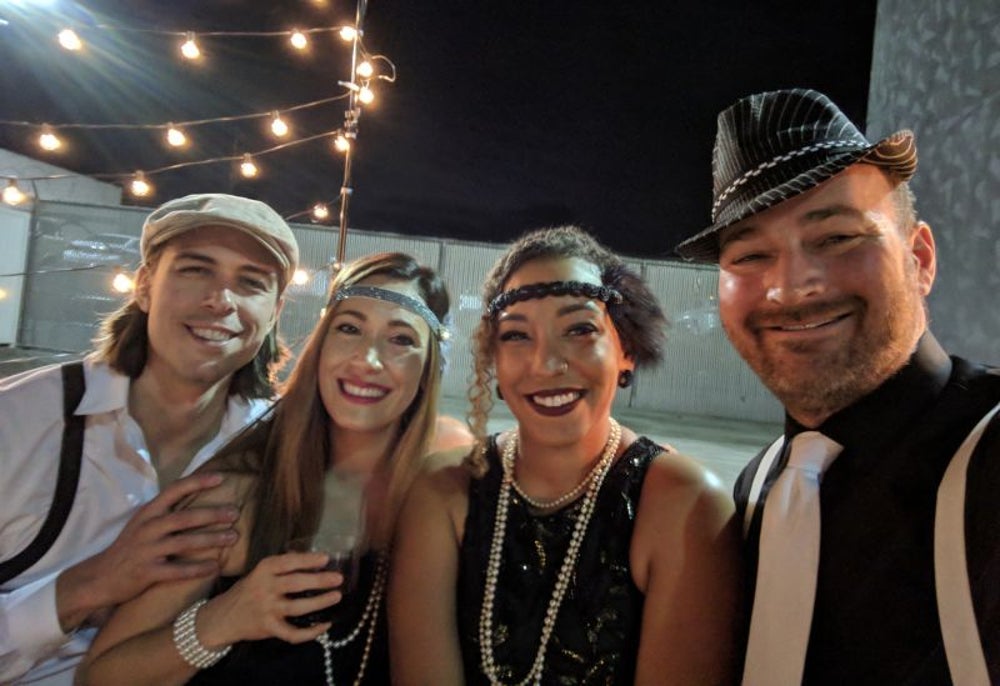 Evite’s business is based on its users organizing get-togethers, so Evite is all about special events. Halloween is one occasion that’s a big deal at the company, and the team votes on who has the best costumes in a number of categories, one of which is a prize for the best group effort.

During the week of the 2018 all-company summit, the Employee Experience Team hosted a 1920s-themed party at an art space in Downtown L.A.

“It was an ode to our 20th birthday, and we put on a speakeasy theme,” Gharabally says. “We had fun prohibition era cocktails, everyone was dressed in flapper gear and pearls or funny suits with fedoras. Everyone really brought it.” 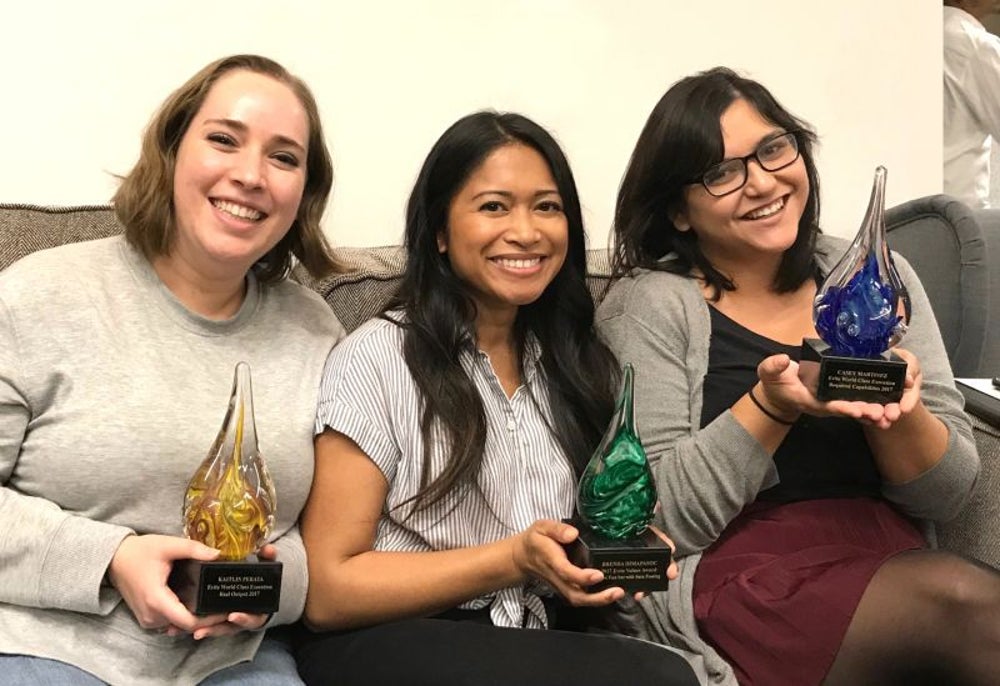 Evite has eight core values, which are on display throughout the office. These include “Trust in being transparent,” “Always be yourself” and “Act with the utmost integrity.”

In addition to physical signage, the company grants an award to an employee who embodies each core value every year at its all-company summit. The entire staff weighs in on the nominations.

“We recognize them in front of the company, and we often will read off the quotes or remarks that people have provided,” Gharabally says. “It’s very special, because you’re being recognized with the people you work with every day.” 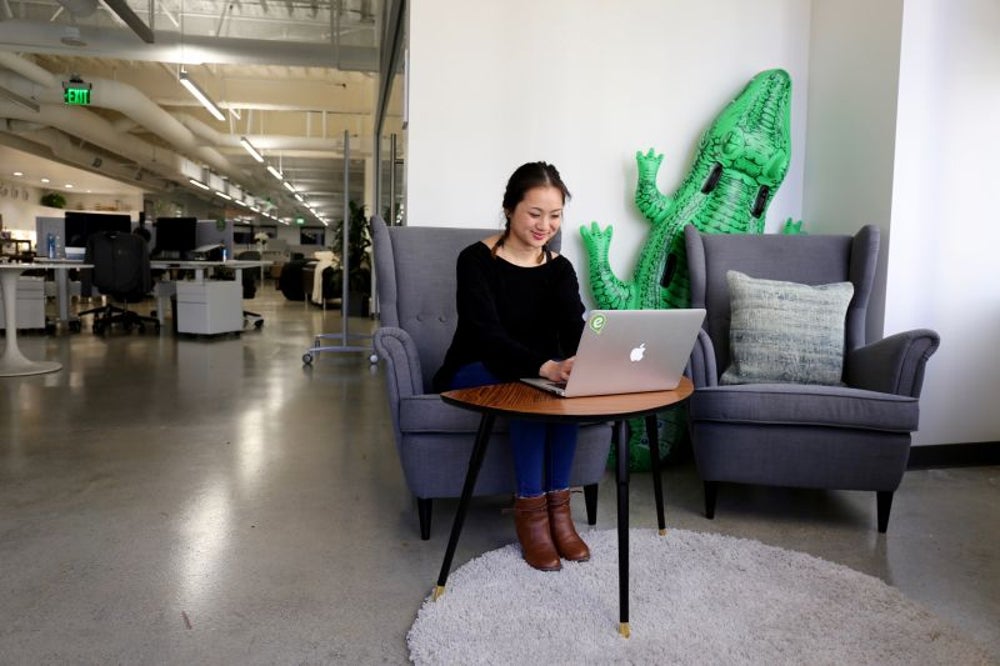 The Evite team spends a lot of time together, but sometimes, employees need to work in solitude. The has deliberately created quiet working spaces within the office, given that nobody, not even CEO Victor Cho, has an office.

Within the open-office, there are high-top tables, lounge chairs in nooks and corners and the bean bags in the Hollywood Bowl area. All of these alternative seating arrangements are options that allow employees to break away from their desks if they wish.

Related: I 'Hot Desked' for a Week, Switching Desks Each Day. Here Were the Two Big Benefits.

“We’ve instituted this policy where, if someone is sitting away from their desk and clearly working, you should try not to disturb them and let them have that deep work time to focus on something,” Gharabally says.

Evite has many ways to solicit feedback from employees. 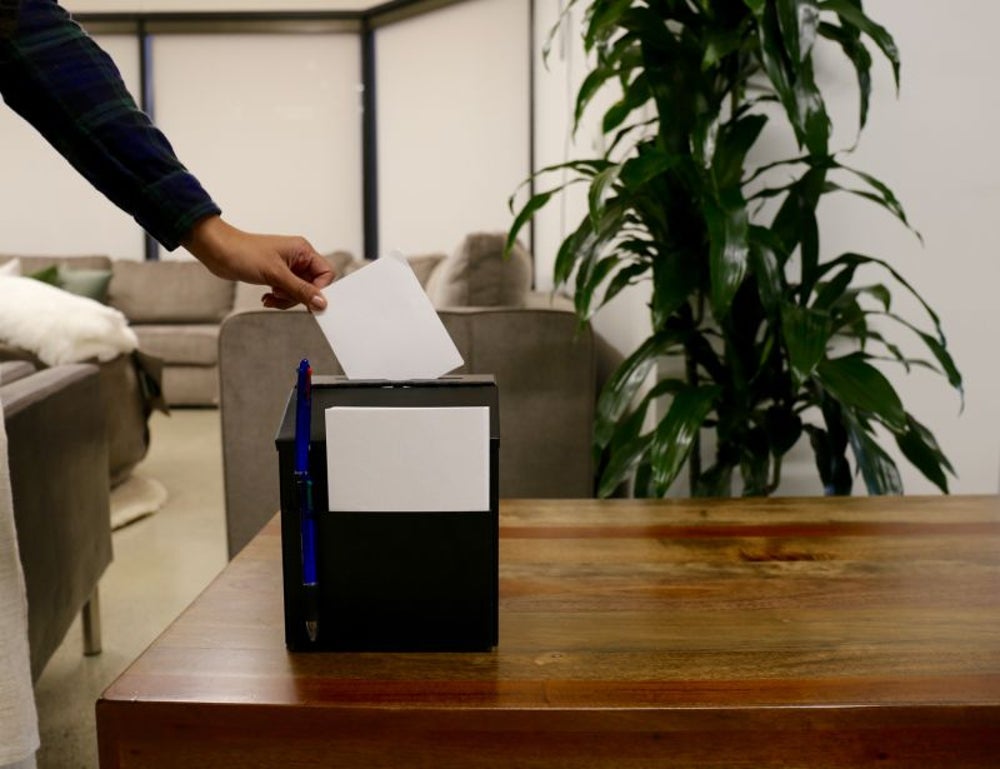 Amy on the Employee Experience Team introduced the notion of a physical suggestion box during the all-company summit. It’s a brown box with a lock on it where employees can make requests for features.

Last year at the all-company summit, an engineer requested better coffee for the office, and Evite delivered with a new machine that makes espresso drinks. Now, employees won’t have to wait until scheduled meetings to provide feedback.

“It’s something that might seem silly or trivial,” Gharabally says, “but it’s a good representation of, ‘We took your feedback, we heard you and here it is, hard at work.’”

After the all-company meeting, the Employee Experience Team also sent out a survey about the week’s events to gauge how colleagues felt about the discussion and amenities.