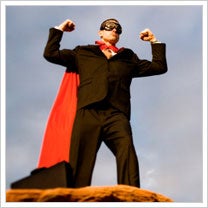 Global wealth indicators may have plummeted to record lows this year, but the "real-life superhero" movement is on the upswing. According to a CNN piece earlier this month, the number of people who are taking on superhero identities (and donning outfits to match) has risen more than 25 percent since last summer. People disillusioned by a downtrodden economy, the article suggests, are finding renewed purpose by assuming superhuman alter egos as they "perform community service, help the homeless and even fight crime."

That may seem odd, but the link between superheroes and periods of economic uncertainty is hardly new. Many of the most famous--Superman and Batman chief among them--debuted as comic book stars around the time of the Great Depression and WWII.

Superheroes serve as a distraction from real-life economic distress.
According to Erin Clancy, curator of the current Superhero exhibit at the Skirball Cultural Center in Los Angeles, "In the 1930s, the American Dream had become a nightmare, and I think comic books and superheroes in particular provided an escapist form of entertainment that allowed the American public to go into a fantasy world where all the ills of the world were righted by these larger-than-life heroes."

A hastily enacted fiscal spending plan is far less comforting than a superhero who saves the world on a regular basis.
Howstuffwork's Jane McGrath noted in her blog that Superman sometimes fought against villains who exploited the hard times for personal gain. Superheroes offer more than escapism--they offer hope, too.

The superhero comic is an example of an innovation that arose from a downturn.
Besides comic book heroes, a slew of things we consider essential to our lives today were invented or popularized during the Great Depression, including nylon stockings, penicillin, and yes, even sliced bread. Who knows what will emerge from this recession?

In the meantime, at least one superhero is also toughing out the worst market in years. A new storyline has Peter Parker losing his freelance job at a newspaper and having to work at McDonald's. Fortunately, based on Spiderman's track record, he should be able to triumph over this tough spot, too.