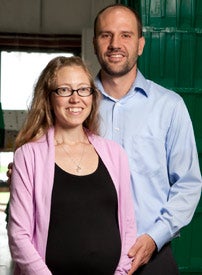 Matt Ewer's entrepreneurial streak bloomed early. As a kid in Marion, Ind., he sold fresh sweet corn from his family's farm out of his first food delivery "truck": a Radio Flyer wagon.

Years later, after earning his degree in environmental management from Indiana University, Ewer ran a small farm in Seattle. It was then he realized that the farm culture in which he grew up--and the access to locally grown produce he enjoyed--was a far cry from what was available in most low-income areas. He decided to change that.

In 2007, Ewer and his wife, Elizabeth Blessing, returned to Indianapolis and founded Green B.E.A.N. Delivery (the name stands for Biodynamic, Education, Agriculture and Nutrition), a membership-based organic farm and food-delivery business. For a minimum $35 weekly order or a biweekly standing order, members receive deliveries of local, organic produce and other products from the company's network of farmers and artisan food-makers.

Ewer says Green B.E.A.N. enjoyed a "right place, right time scenario," and the community embraced the couple's concept. Within two years, the business added a farm in Cincinnati and now has more than 100 employees.

But it also serves up a healthy portion of community service. Along with their commercial success, Ewer and Blessing have worked to shatter the barriers that keep many people from getting--and affording--healthful food. Among its initiatives, the company makes weekly deliveries to Freestore Foodbank in Cincinnati, which serves more than 300,000 people through 325 partners in Indiana, Kentucky and Ohio. The 1,000-pound deliveries comprise fresh produce and milk--the latter, says Kurt Reiber, president and CEO of Freestore, is "especially difficult to get."

The biggest organic growth sector? Fruits and vegetables. Sales bloomed 11.8 percent from 2009 to 2010.

When the local National Public Radio affiliate does a food drive for Freestore, Green B.E.A.N. matches the donations, usually resulting in 15,000 pounds of fresh produce, delivered on a schedule set by the nonprofit so the food doesn't spoil.

Yet not all people in need of food go to food banks, so Green B.E.A.N.'s Garden on the Go program, a partnership with Indiana University Health, sends vegetable trucks to low-income communities whose citizens have disproportionately high rates of obesity, diabetes and heart disease. Produce prices are slashed, and the truck accepts food stamps as payment, along with cash and credit or debit cards.

In the first year, the program made more than 15,000 transactions. Now Ewer and Blessing are working to find ways to infuse school lunch programs with more healthful options.

Over the last five years, Green B.E.A.N. has donated more than 200,000 pounds of fresh produce to various nonprofits. And Ewer is looking for more ways to get nutritionally sound, organic food in the hands--and mouths--of people who need it most.

"We feel like community involvement is really a privilege for our company. We take it as an obligation," he says. "We look forward to increasing that as we grow."