Sarah Max
January 21, 2013 5 min read
Opinions expressed by Entrepreneur contributors are their own.

John Parker, 45, started helping out at his family's Goldsboro, N.C. barbeque restaurant as soon as he was old enough to hold a mop. He remembers a bustling lunch crowd of people who put their racial and socio-economic differences aside in the name of good food. "We had doctors, lawyers, small-business owners, mechanics and garbage workers," he says.

Guy Parker's Barbeque Restaurant was one of the first in the region to welcome black and white customers to sit down in the same dining room.

When Parker's father opened the restaurant in 1962, the Civil Rights Movement wasn't top of mind. The World War II veteran and barbeque pit master was more interested in winning over customers with his succulent pork, barbeque chicken and tangy secret sauce. Prior to that, he spent 18 years working at a restaurant that, though black-owned, seated white patrons in the front and asked black patrons to pick up their food in the back. "He didn't judge them for that," says his son. "That's just how things were done." But he had no intention of doing that in his own establishment.

When Guy Parker's restaurant opened, everyone came in through the front door. Initially, says John Parker, customers – including white customers – asked if they could sit down for lunch. "My mom and dad said that anyone was welcome as long as they conducted themselves in a respectful manner," he says. "They didn't have to ask to come in and eat." If there was any hesitation, he says, customers seemed to get over it when lunch was served.

The restaurant was a thriving local institution for more than four decades. "We had people come from all over, and we shipped barbeque to places outside the state," says Parker. The restaurant closed when its proprietor became ill in 2005 and passed away in 2006. The family still owns the property and opens the restaurant for special events.

A few years ago, John Parker found himself out of a job and looking for a business idea of his own. "My dad always told me that if a man can't find a job he can create a job," he says. He considered reopening his father's restaurant, but it's two hours from his current home in Greensboro and would need some upgrades and new equipment to reopen as a full-time restaurant.

If he couldn't bring back the restaurant, he figured, he'd give them a taste of it by making and selling his dad's secret sauce. 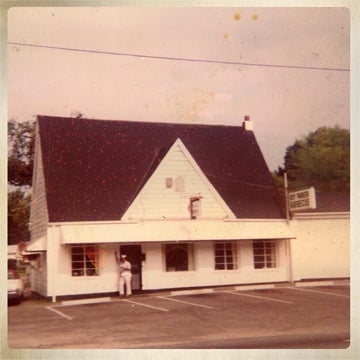 "I didn't know the true recipe until after my father passed away, he recalls. "I was talking to my mom in her home, and she walked over to a file cabinet and pulled out a recipe." The recipe was hand written on notepad paper. It had the exact ingredients, which include apple cider vinegar and crushed red pepper, and cooking times. Still, it took nearly a dozen batches for the young Parker to figure it out. "My father was so used to pouring in this and pouring in that," he says. "It wasn't as simple as I thought it was, but eventually I got it right."

Related: How Do I Sell My Homemade BBQ Sauce?

After perfecting the recipe he got the UPC code, nutrition information and logo – a photo of his dad tending the pit – lined up and started selling Guy Parker's Old Fashioned Bar-B-Q Sauce out of the trunk of his car to local stores in his old home town. "I knew if I couldn't make it in Goldsboro I couldn't make it anywhere," he says. In many ways, the timing was perfect for the move to all natural food, says Parker, adding that the sauce has no sugar, gluten free and can also be used for vegetarian dishes. "Everything back in 1962 was all natural, and now we've come full circle."

Parker managed to get his foot in the door with some larger independent grocery stores and even some chains, including Piggly Wiggly and Southern Seasons. But things really took off, he says, when he started working with a regional distributor. Parker is now selling the sauce directly online and at stores throughout North Carolina, including Harris Teeter, The Fresh Market and Whole Foods. "We just started branching out into South Carolina, and by the end of this year I want to be in five other states," says Parker, who outsources production to a co-packer and is looking for distributors in other regions.

Last year, the company sold more than 25,000 bottles of barbeque sauce, he says, roughly five times what he sold in 2011. If he sells enough sauce, he says, he'd love to get the old restaurant up and running again. "Things were different back then," he says of the restaurant's early years.  "But in all honesty, food brought people together."