Franchise Players: From Making Minimum Wage to Running the Show

This article was originally published on February 21, 2014.

Franchise Players is Entrepreneur’s Q&A interview column that puts the spotlight on franchisees. This week, we’re celebrating individuals who worked their way up in the industry from hourly workers to franchise owners. If you're a franchisee with advice and tips to share, email ktaylor@entrepreneur.com.

Dulce Luevano has been working hard for a very long time to become the franchisee she is today. She was only 14 when she began working at a chicken and quail farm with her parents during the summer. When she was 16, she began working at CiCi’s Pizza, making the minimum wage of $5.15 per hour. Her first year of college, Luevano dropped out of school after her mother fell ill, working at CiCi’s to pay the medical bills. Now 28, Luevano has pushed herself to the limit to open her own CiCi’s, which opened up shop last year. Here’s what Leuvano has learned about how hard work can pay off in the franchising industry. 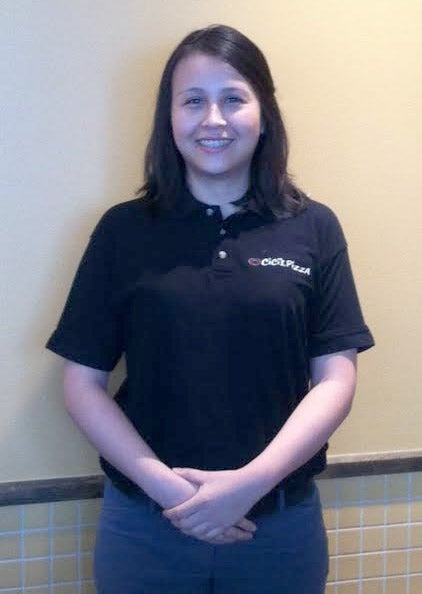 How long you have owned the franchise:

I have always dreamed of owning a business. Franchising provides peace of mind and takes some of the risk out of business ownership. The CiCi’s support team is always there to help find ways to build sales and manage costs, which ultimately helps to boost the bottom line. I also recognized the advantages of franchising with a nationally recognized brand; CiCi’s national advertising campaigns ensure that we stay top-of-mind for guests.

Related: Franchise Players: An Auntie Anne's Franchisee on the Importance of Seeking Advice

My first job was working with my parents at a chicken and quail farm. After two summers, I knew it was time to find a new job. I was 16 years old when I was first hired at CiCi’s Pizza of Albemarle, N.C.

When I graduated from high school, I could not afford to attend college so I worked toward a promotion to assistant manager to help pay for my education. While in my first year of college, my mother fell ill and I had to drop out of school to help my family pay the medical bills. I continued working at CiCi’s and was promoted to general manager at the age of 18, a position I held for nine years until purchasing my own location.

When I first started working at CiCi’s, I loved how encouraging and motivational the managers were. Their intense energy and excitement made every day a success. That's when I said, “This is it for me.” God put me here because I need to be a part of this. I loved the way that the staff and the guests are treated like family. I believe it’s the relationships we build that allow us to build our sales year after year.

The typical investment for a new CiCi’s location is approximately $370,500 - $625,000, inclusive of tenant allowance and based on geography. However, since I took over an existing location, my investment (about $30,000-35,000) was much different than a ground-up project.

Most of my advice came from within the CiCi’s franchise system. I consulted with my Brand Excellence manager, Robert Smith, throughout the process. Robert truly paved the way for me, introducing me to the right people, starting the franchisee certification process and offered support through every step.

I also spent a lot of time discussing this decision with my friends and family. Being a franchise owner is not a normal 9 to 5 job, so I needed to make sure I had support from those close to me.

I continue to seek advice from colleagues and the franchise support team so I can continue to grow my business and as a franchise owner.

Since I was with the company so long prior to ownership, there were few surprises throughout the process. I worked closely with the support team at the corporate office and was prepared for each step.

The most challenging step for me was trying to get a small business loan from the bank. In 2005, a local franchise owner chose to sell CiCi’s Pizza of Albemarle, the location where I got my start. It was one of four locations he owned. He made an offer to me, but at the age of 20, I lacked the adequate equity and credit score to become a small business owner. To build credit, I purchased houses that I rented out while I continued to work at CiCi’s. About five years after the initial offer, I was presented with another opportunity to purchase CiCi’s of Albemarle, and this time around I was ready.

Make sure you are passionate about the industry you are going into and you are willing to dedicate 110 percent of yourself to this business.

Also, make sure you understand and agree with all of the franchisor’s rules and regulations. After all, following the franchisor’s guidelines and business model is what helps you be successful.

I love every minute of being a franchise owner and hope to grow within the system to become a multi-unit owner. I plan to buy a second location in about two years.