First, he made finding a gig worker easy. Now he wants to fix a 'broken' retirement savings system.

Kevin Busque says he was confounded. He just couldn't understand it.

It was 2012, and of all the employees at his company, TaskRabbit, he estimated that only around 34 percent had signed up for a 401(k). So he held an informal discussion with them to dig into this issue. It turned out, this group of Silicon Valley workers found the whole system too confusing.

"It was very clear the younger generation was not investing even though they were the ones that were really interested in savings," says Busque, who co-founded TaskRabbit with his wife, Leah. "So there was an issue there, and it kind of smacked me in the face a few times. The system is completely broken."

Related: The 10 Best Cities for Retirement

So he made it his goal to replace ADP, the company's 401(k) provider, with something digital that offered investment advice. But after searching for something like that on the internet, Busque says he came up empty. So he did what any entrepreneur would do: He decided to build his own solution.

The result of those efforts is Guideline, an online-only 401(k) provider that launched last August after about two and a half years of work. The company spent the bulk of that time building a system to keep records, an essential part of any operation that deals in 401(k)s in terms of client privacy and legal compliance. Guideline charges an upfront $500 fee then $8 per participant a month, and it integrates employees' plans with a business's payroll provider and has an opt-out system, contrary to many traditional firms' confusing opt-in processes. 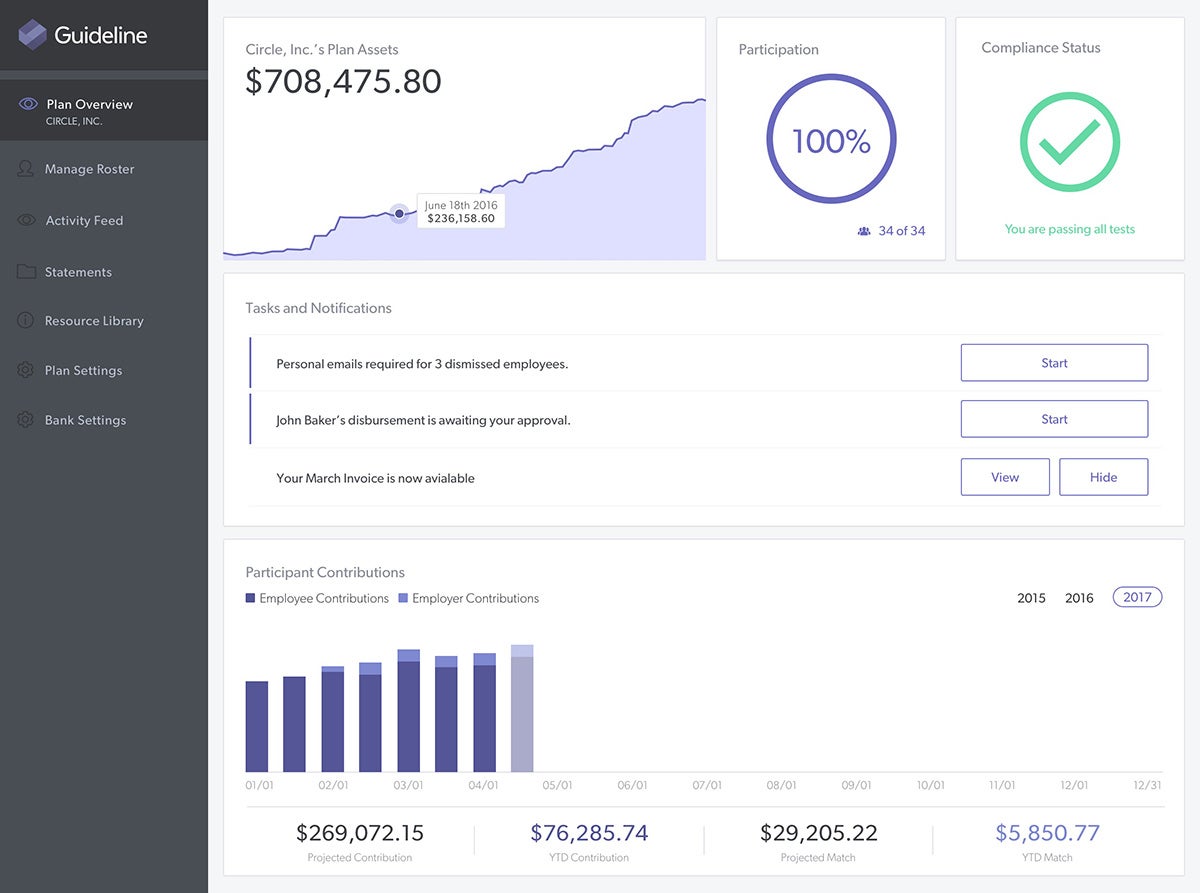 According to Busque, the model is already a huge success. Guideline is bringing in hundreds of thousands of dollars every month and is "almost forking over to profitability." It's also the exclusive 401(k) provider for Gusto, the unicorn payroll company.

“Kevin is a remarkable entrepreneur -- visionary and humble at the same time," says Tomer London, chief product officer and co-founder of Gusto. "We love working with him as he’s truly committed to enabling more people to save towards better retirement."

Busque is not alone in his goal: Captain401, ForUsAll and Money Intelligence also aim to use technology to simplify 401(k)s. Honest Dollar hopes to do the same with IRAs. Feex says it helps people root out fees in their retirement accounts. There are also startups that help people invest, such as Stash and Betterment.

To grasp the appeal of these startups, it's important to understand the main players in the 401(k) industry, such as Great-West Financial, ADP and Fidelity. Employers enroll for their services, and employees can sign up for an account based on their employer's HR policies. For plans that require employees to opt in, participation rates hover around 69 percent for businesses with 100 or more employees and 36 percent for smaller companies. Plans with automatic enrollment see much greater participation.

Anyone who's ever had to sign up for a 401(k) knows how confusing it can be.

"To be honest, nobody takes finance classes other than nerds like me," Tim Guilford, a registered principal at Raymond James Financial Services, told USA Today. "So when you're presented on your first day of work with a list of all our funds and asked how much you want to put in our plan, people are poorly equipped to make those decisions."

And because many 401(k) providers aren't allowed to offer financial advice, many people just choose options that sound good. Meanwhile, the firms also take in fees, which has led to several lawsuits. And they don't even have to work in your best interests, as President Donald Trump delayed an Obama administration rule that would have required financial institutions to do so. (Last Week Tonight With John Oliver did a digestible segment on the industry's problems.)

Guideline recommends plans not only based on your age, but your family status and where you live. The app will ask you about life changes every year. It's a solution built for today's internet consumers, or "the most employee-focused 401(k) for small business," as Busque puts it.

He sees Guideline, which employs about 35 people, as a software company that is "B2B2C." And while the ethos in Silicon Valley is to disrupt industries, Busque says that wasn't the right approach with Guideline.

"It's actually a really enormous problem, which makes it really fun and challenging," he says. But "it's super, super important just getting things right to start, and I know people in Silicon Valley like to go fast and break stuff. You can't do that with people's retirement savings."