The former Yahoo CEO offered wisdom about decision-making and work-life balance in a talk earlier this year.
Next Article

Now that Verizon has completed its acquisition of Yahoo, former CEO Marissa Mayer is most likely looking for her next job (and it reportedly won't be leading Uber).

If Mayer has anything, it’s experience. Earlier this year, Mayer, who is also a former Googler, returned to her alma mater, Stanford, and spoke to students about her education, career and family life. She also addressed how she deals with all of the critical comments (she has plenty of haters, especially in the media).

Entrepreneur picked through the 40-minute talk to find the most interesting and useful tidbits (and spare you the tech CEO's long-winded public speaking).

In true nerd fashion, Mayer put her career choices on a matrix. 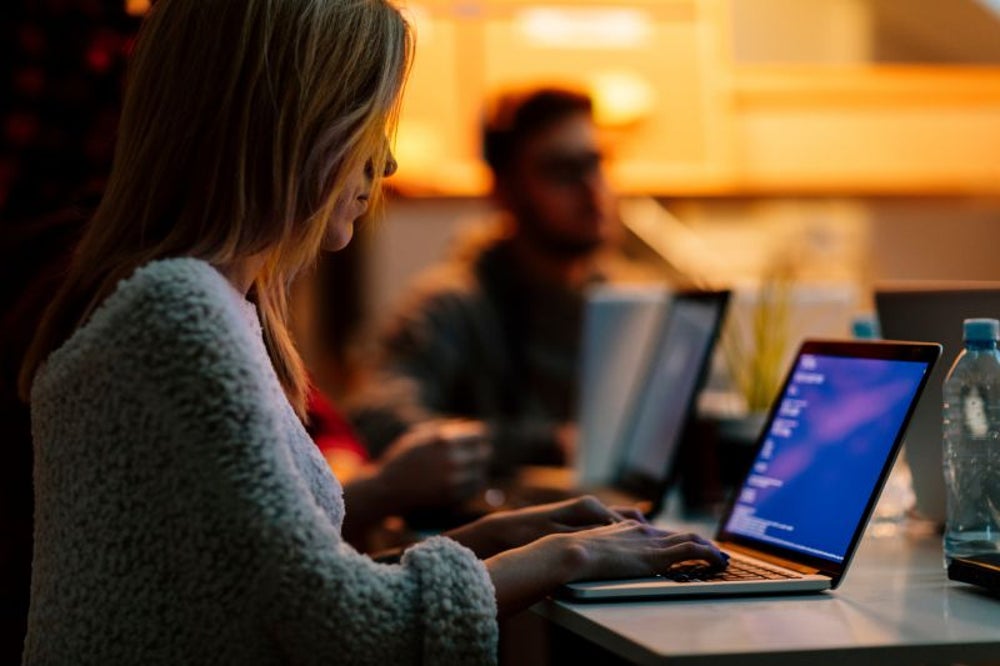 When Mayer was living in Stanford's Schwab dorm from 1997 to 1998, she would get job offers from fellow students who either had founded companies or knew someone who did.

"In the end, I picked about 14 offers, and I had to sort of sort and shift through them all," she said. "There were a lot of different things that weighed on me at the time, and it was easy for me to pick the best offer of each type."

To help her make a choice, she called on a friend, and the pair charted each offer on a matrix with the job's location, salary, trajectory and "happiness factor." But she found this was the wrong approach.

“At about midnight, I just got really overwhelmed and … he's like, ‘I have to tell you, I think you're approaching it all wrong,’" she said. "He's like, ‘you think there's one right choice and 13 wrong choices. I see 14 very good choices, and then there's the one that you're going to pick and commit to and feel good about. It's not going to be a matter of right vs. wrong.’”

This decision-making process led Mayer to realize her best piece of advice. 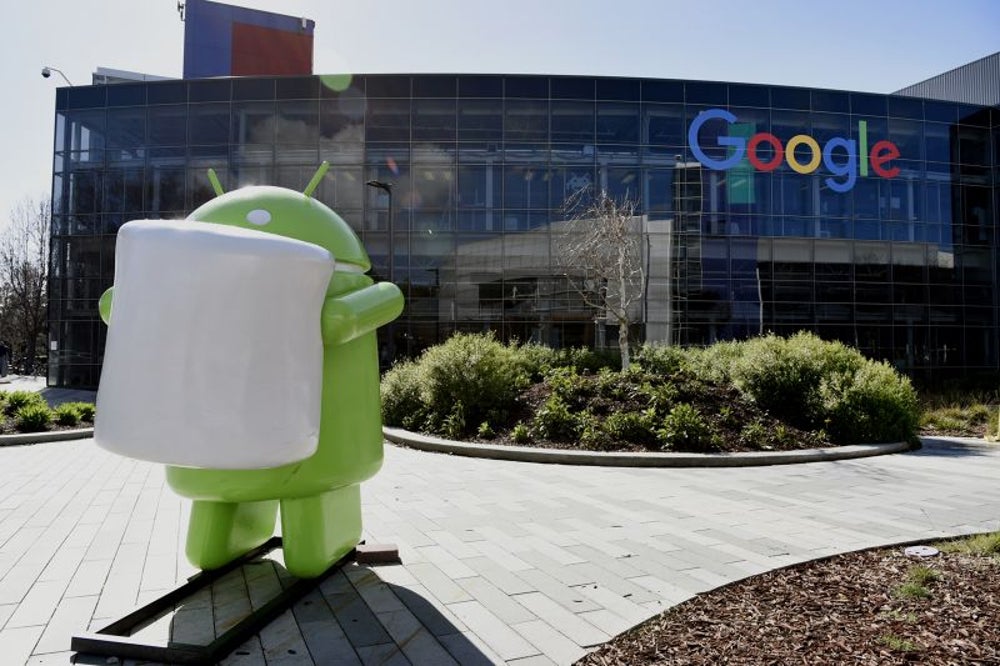 "A lot of times, smart people get really committed to a problem and start to analyze it as if there's only one great option and all the others are not. And that's just not how life works," she said. "It's important to realize, when you get really overwhelmed in those kinds of choices, to think about it that way. Go to bed. Sleep on it. And what you think first thing in the morning, that's what you should do. Follow your gut."

She added, "So I went to bed, woke up in the morning and I wanted to work at Google.”

Mayer said you should choose roles you're unprepared for at companies you know and love. 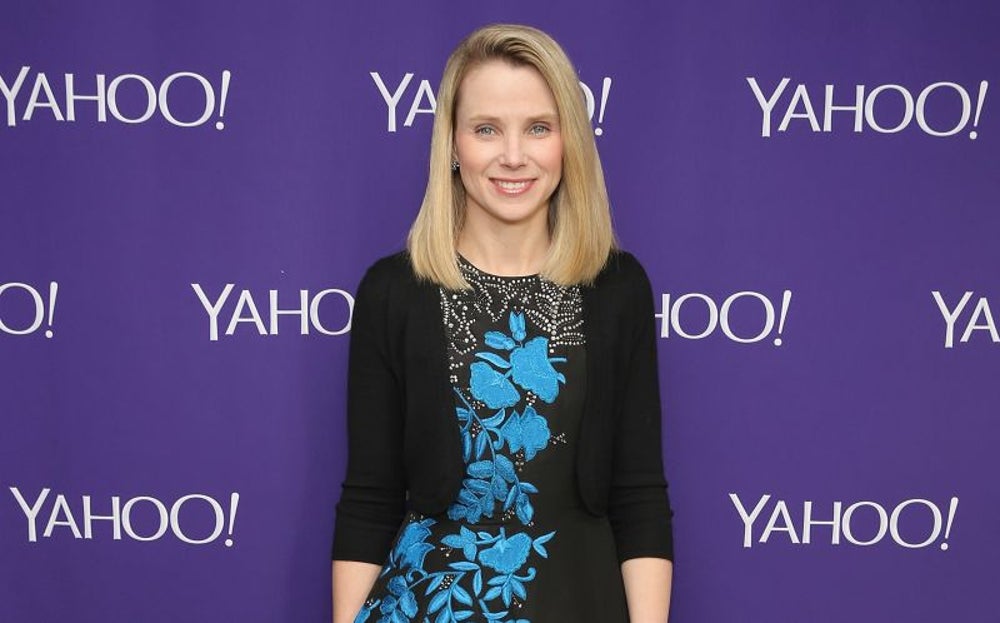 She said that part of the reason she accepted an engineer role at Google is because she felt "unprepared" for it. She said she also felt the same way about stepping into the CEO role at Yahoo. But that was only half of the reason she wanted to work there.

"I'd always respected Yahoo. I knew Yahoo, back when it was still David and Jerry's Guide to the World Wide Web," she said. "People love Yahoo."

Mayer said she once asked a friend who owned a gallery how he picks which pieces to display. He told her that he likes "to support local people and also art from people who are nice. Life's too short to work with people who aren't nice."

Similarly, a preference for nice guys is what guided Mayer to Yahoo.

“You could also tell that the people at Yahoo were nice and were fun and their hearts were in the right place,” Mayer said. “Even though different parts of the company had their challenges, you could tell that, when you used the service, the people there really took a lot of inspiration and joy out of the work that they did."

Mayer used cold logic in her approach to Yahoo's turnaround. 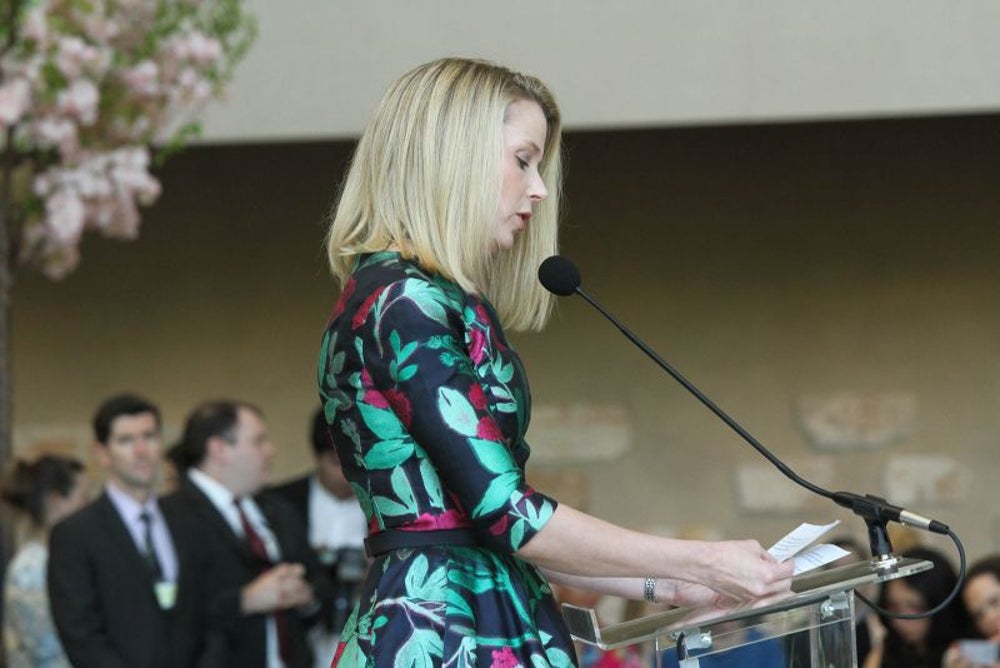 When Mayer got to Yahoo in 2012, she and her team looked at the company’s various revenue streams. She estimated that there were about 10 to 12 of them, and all of them were in decline.

"I'm a workaholic, and I like to work on really hard problems,” Mayer said. "When I asked the current leadership of the company how are we going to get any of those growing, nobody had any ideas. The answer was, ‘they're in decline. They're going to decline for the foreseeable future, they're going to decline based on industry trends, they're declining.’ That's a pretty harrowing diagnosis when you're the new CEO."

The company was losing about half a billion dollars a year, Mayer said.

"When you're a turnaround CEO, you've got to make a decision: Can you turn around the existing lines of business and get them growing again? Or do you have to invent new lines of business?" she said. "That became very clear within a matter of weeks of arriving, like, we need to create new lines of business. And so, for us, it really became about mobile. Not only just products, but mobile."

The problem, Mayer said, was that Yahoo had only about 30 mobile engineers at a company of 14,000. It was only pulling in about $11 million in mobile revenue in 2011. Still, she told the board she was betting on it. 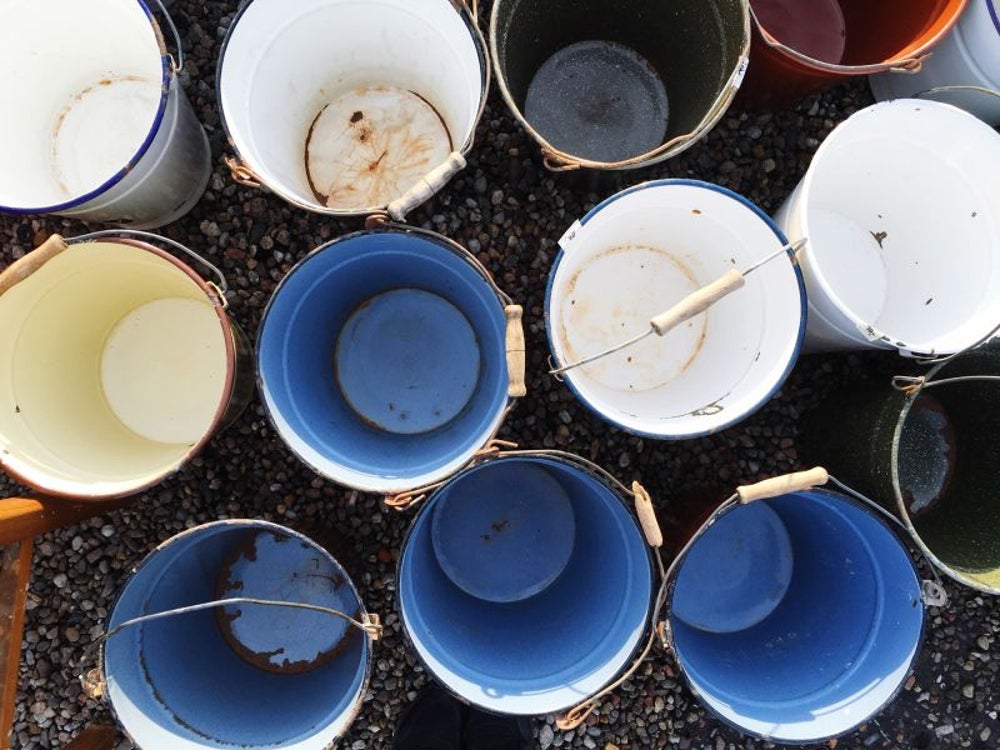 During Mayer's tenure as CEO starting in 2012, Yahoo acquired nearly 50 companies, most notably Tumblr. She detailed her acquisition strategy during her talk at Stanford, explaining how it contributed to her turnaround efforts.

"I always thought of the acquisitions in three different buckets -- small, medium, large. Each had a different purpose," she said. "We bought a lot of small companies for the talent, getting teams in the door quickly because we needed to move fast and just start shipping mobile products. We did medium acquisitions for technology and teams."

She said this strategy helped the company grow its mobile user base from tens of millions to 650 million, and it boosted mobile revenues from $11 million to $1.5 billion.

"Now, it looks easy, and like it was the right path, and the strategy looks like it worked,” she said. “But at the time, there was a lot of debate.”

Related: Synthesizing Startup Feedback: What to Use, What to Ignore

Mayer dealt with all of the scrutiny she received by ignoring most of it. 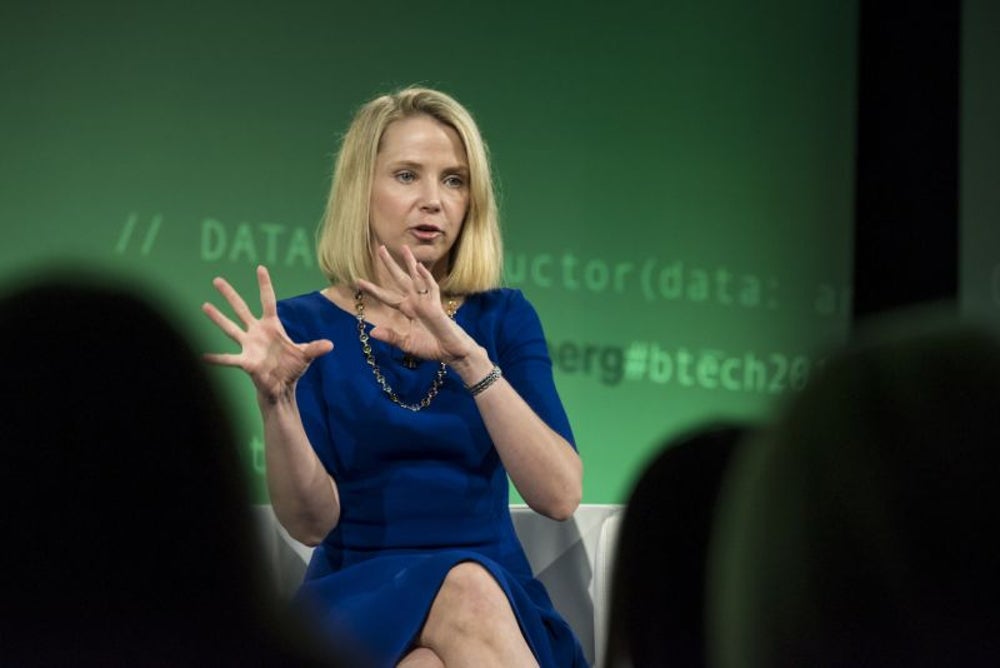 Mayer receives a lot of hate and criticism regarding her performance as the CEO of Yahoo. So how did she do her job with so much negativity directed at her?

"I just don't read it,” she said. “That may sound tone deaf, but I feel like if you read it, it changes who you are and how you think about things.” Mayer pointed out that if a leader makes a decision that seems smart but is actually wrong, but still gets praised for it, it's hard to change course.

"To make decisions or allow your decision-making to be influenced by a third party who has a fraction of the information that you have just overall isn't a great strategy," she said. "[But] I try not to be deaf to it. I've got a PR team that will summarize some of the bigger issues and points that are being made. I also have a husband [so] if I'm worried enough about something, I'll ask him. If you're going to get criticism, it always sounds better coming from someone who loves you or someone that you work with."

She continued, "You either have to have guidelines for how you're going to absorb it, like I do, or you have to have very thick skin. I tend to think I have a bit of both, but you have to have a way of cutting through all that noise to what's a valid criticism that needs to be acted on and what isn't."

Mayer doesn't oppose working from home, but she said Yahoo's policy was too ambiguous. 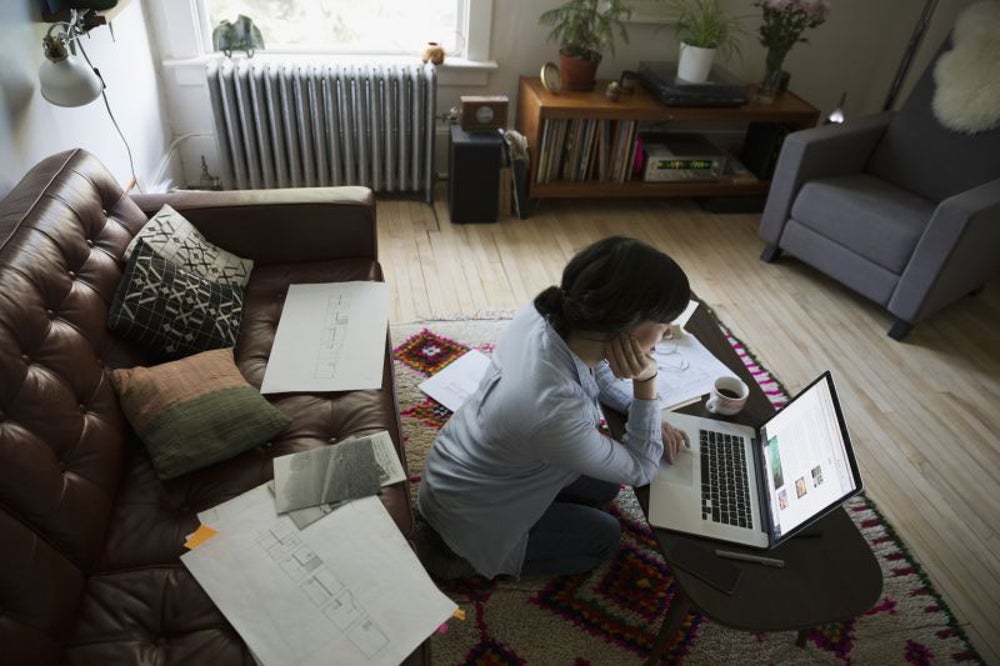 In 2014, Mayer updated Yahoo's remote work policy so that most employees had to come into the office. She received a lot of flack for the decision, the reasoning for which she explained to the Stanford crowd.

"I actually have nothing against work from home. I think it's a perfectly valid way to do things," she said. "When I first got to Yahoo, [there was] so much turbulence and energy was low. One of the challenges I had was, I had to re-energize the campus. [There were] people who had dedicated setups where they were working from home 100 percent of the time, but it was the person who said, 'It is raining really hard today. I think I'm going to work from home.' And I would have high performing Yahoos coming and talking to me and saying, 'It's really frustrating. Every now and then I've got this person on my team who just doesn't show up for work, and it doesn't really feel like they're working from home.'  … This was Yahoo's moment to return to greatness. We needed all hands on deck. You should be here in the office, because this is our moment, this is our time. We need to seize it."

Mayer addressed why she returned to work so quickly after having a baby. 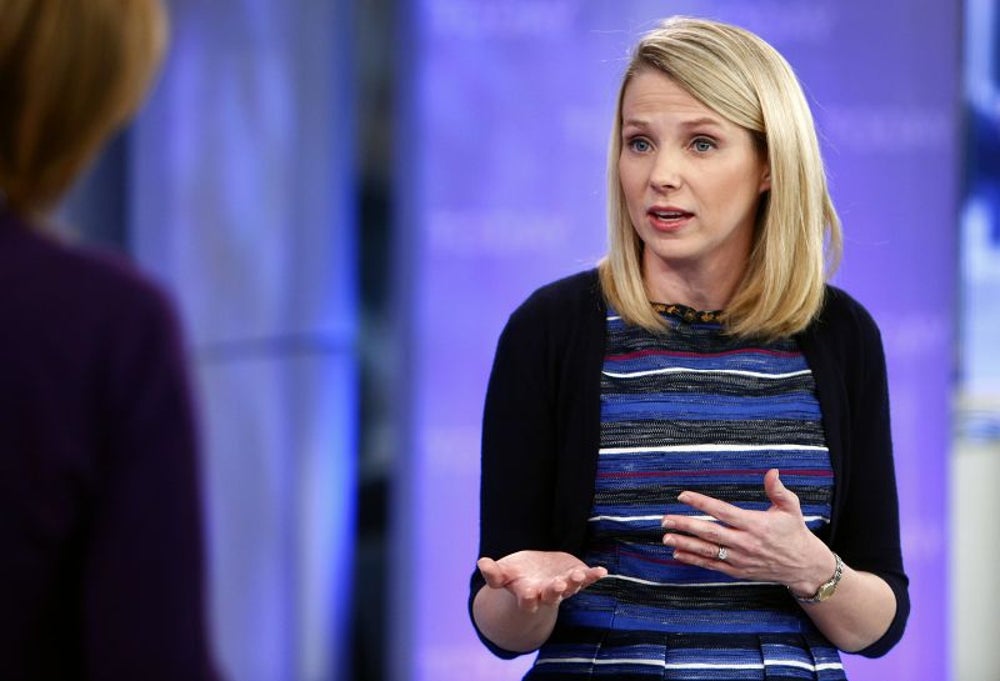 Mayer was sharply criticized after she announced she would take only two weeks of leave after giving birth to her son in 2012. (Flash forward to today, when Facebook co-founder and CEO Mark Zuckerberg said he would take two months leave for the birth of his second child.) She pointed out that she was already pregnant while still at Google when she was considering the CEO role at Yahoo.

"I just thought it was unfair to Yahoo [to take two months leave] given the state that it was in and how much time is really of the essence to catch up in the mobile race," she said. "It doesn't mean that I don't think it's reasonable to have maternity leave or would advocate for people giving up their maternity leave the way that I did. But I had an obligation to my employees and shareholders."

But being the best mother she could be was also her priority, she said.

Mayer travels with her kids to get them out of the Silicon Valley bubble. 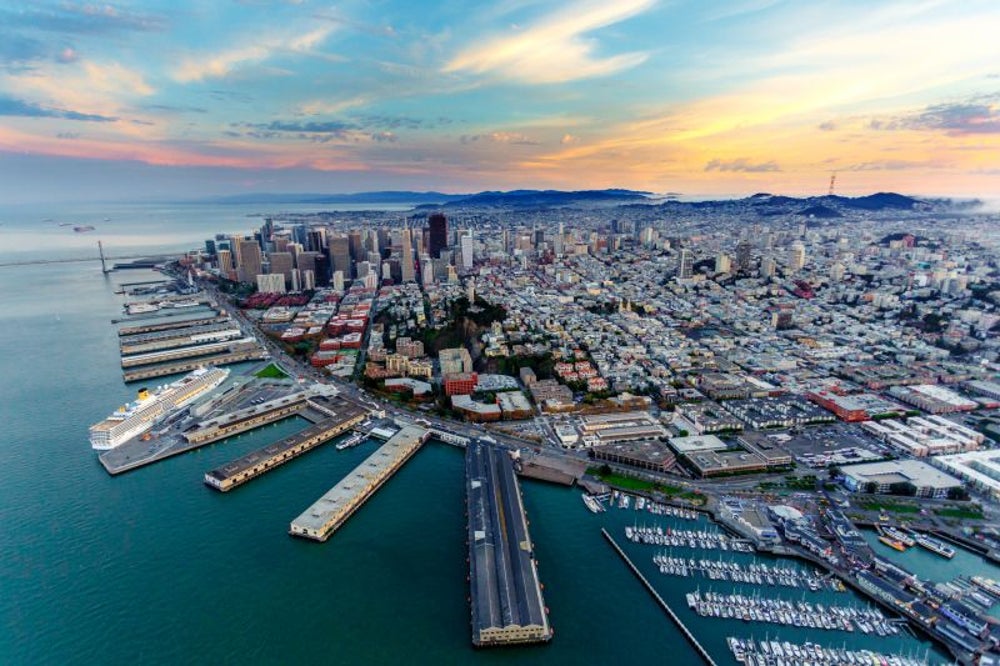 Mayer also has twin daughters, who were born in 2015.

"Some of the biggest impact you can have in the world is raising kids to be productive, creative, amazing people," she said. "It's really an amazing gift to be able to raise kids [in Silicon Valley] and be able to expose them to so much.”

However, she added, “We tend to travel a lot and we want to make sure that we expose our kids to larger things.”

For those who have the means to travel, let alone live in the Bay Area, Mayer’s advice is indisputable. Yet Mayer has been under fire for her elite parenting practices in the past -- for example, not every working mother has the authority to build a nursery in her office.
More from Entrepreneur

Helping Out in My Mom's Hair Salon Taught Me the Secret to Resilience, Even When Declaring Bankruptcy

Taxes Are Due in 2 Weeks and Last Year Was Messy. But This Expert Has Seen It All: 'Take a Deep Breath, Then Take Control.'

Dear Brit: Should I Name My Company After Myself?

Dear Brit: 'How Do I Find Customers Who Will Spend Lots of Money and Gush About Me to Their Friends?'