How to Ask Influencers for a Favor (And Actually Get It)

By David Rekuc July 28, 2014
Opinions expressed by Entrepreneur contributors are their own.

You’ve heard it before: “It’s not what you know, it’s who you know.” It’s an adage as old as the hills, a simple statement that sums up how important the right connections can be. Maybe you want an endorsement for your company from someone influential, maybe you need an investor. Maybe you just need someone popular to get people talking.

Content marketing, publicity, relationship building, whatever you call it, buy-in from “influencers” can make or break your efforts. Connecting with influencers takes time, research and sincerity. The best relationships are rarely formed in the spotlight and are never formed in an instant. It’s not as if your recipients are going to see your content, fall in love with your ability to communicate and trip over themselves to help you out.

Case in point, I asked Rand Fishkin, the founder of Moz, about a time he could recall being impressed by an outreach email.

"I received an email from Larry Kim of Wordstream a few months ago sharing some research their team had done into gender bias,'' he recalled. "Larry's email noted that they had used a bit of data from Moz's industry survey and that the topic was important to him. I was really impressed with the email itself and the piece. I shared it on every social network I use and have included it in some presentations as well.''

This story brings me to my first tip:

Provide real value. When Larry shared his research with Rand, the article was chock full of new, informative analysis. Larry’s outreach went over so well because it was genuinely interesting and useful. Without content that could be of real use to the reader, there’s no way such an email could have elicited the same response.

I also asked Rand about bad experiences he’s had with email outreach.

"Conversely, on a daily basis, I get emails from founders, marketers and those new to web marketing asking for broad, consulting-level advice and assistance,'' he said. "I love helping people but, sadly, a good number of folks who email me do so with an attitude of entitlement, peculiar hostility and the expectation that a simple answer will solve incredibly complex problems like how to attract attention and awareness to their new product/website.''

Top influencers just don’t have hundreds of spare hours to help out everyone who contacts them. Which brings me to my second tip:

Make It Easy. If you’re reaching out to someone, don’t leave him or her wondering, “What does he want me to do?” Boil it down to the essentials and make it easy for them to help you.

The people reaching out to Rand were asking for far more than they could reasonably expect of a stranger. In many cases, their requests were so broad that it would require quite a bit of clarification before he could offer advice, even if he wanted to.

Ann Smarty, the co-founder of ViralContentBuzz, also weighed in on her experiences with bad and good relationship building. She shared this screenshot with me to illustrate one of the most memorable “bad” emails she ever received: 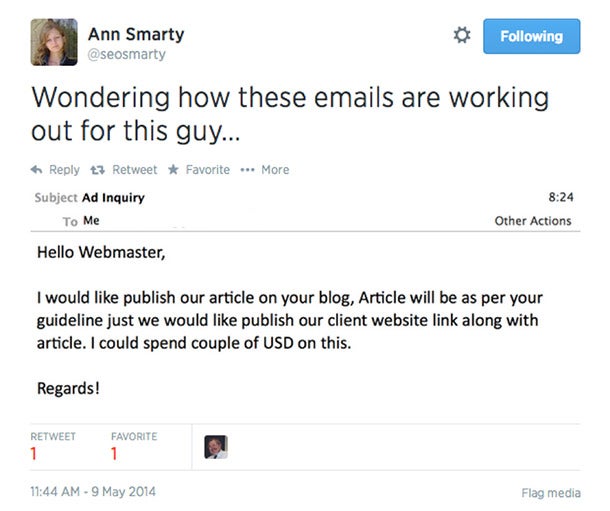 Sadly, poor outreach examples like this are significantly more common than good examples. My third piece of advice is a no brainer:

Do Your Research. Don’t be that guy who starts with “Dear Webmaster…” When you want to build a relationship with someone, at the very least you should know (and use) his or her name.

For even better results, you should do a thorough job searching out this person’s interests, background and goals. Web tools, like the new Buzzsumo app, can help you find what content he or she has shared in the past. When you do reach out, demonstrate that you’ve done your homework.

For an example of outreach done right, Ann told me the story of a guest blogger turned partner.

"As for the wins, all my best contacts come from long-term content relationships,'' she said. "One of the best examples is how Gerald Weber, now my partner at ViralContentBuzz, approached me back in 2008. The article ended up being published here and resulted in many more years of Gerald and me working together on lots of projects. It all started with the guest post but it never ended there. I don't remember his initial pitch but the way he handled that opportunity was awesome. Gerald kept promoting that guest post, he replied to every comment and made it very obvious that he cared about that opportunity. He also made sure we'd keep in touch and now we are partners.''

This leads me to my final piece of advice:

Think Long Term. After Gerald got his foot in the door, he continued to demonstrate the value of a business relationship with Ann. The beauty of building relationships is they have a compounding efficiency. Getting started is the hardest part.

It takes time to get on someone’s radar, build their trust and get them to do something for you. Don’t take that for granted. Continue impressing your contacts long after your initial ask, even during periods when you have very little to gain.

As Warren Buffet said, “It takes 20 years to build a reputation and five minutes to ruin it.”

Related: How to Get Influencers to Help You

David Rekuc is the marketing director at Ripen eCommerce, a full-service digital agency that specializes in building custom solutions for online retailers. Rekuc is a retail columnist at Marketing Land.

8 Types of Clients and How To Deal With Them