In a fast-casual space full of copy cats, El Pollo Loco doesn't want to be the next Chipotle. In fact, it doesn't even want to fit the uber-trendy designation of "fast casual."

Instead, the grilled chicken chain is focused on what executive chef Heather Gardea and other El Pollo Loco executives call "QSR [quick service restaurant] plus."

"We're still making all these things from scratch, but we're delivering it to you quickly," says Gardea, on the El Pollo Loco's culinary approach to an evolving restaurant industry.

When Gardea began working with El Pollo Loco in 2011, the restaurant chain positioned itself as purely quick service – no "plus" included. Marketing meant big discounts and cheap prices. However, under new leadership including CEO Stephen Sather and CMO Edward Valle, the brand decided to emphasize the quality of the chicken (each piece is grilled on low heat for an hour) and the variety of options.

"When we started… they just sold mostly just chicken," says Gardea. "We changed that to say, we want a whole new [set of] offerings [including the] hand-held items, the salads, the sandwiches, the burritos, tacos, quesadillas." 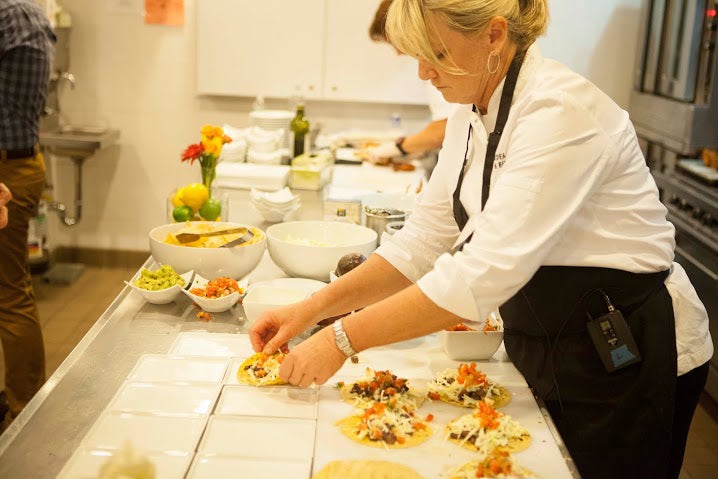 With a new approach to the menu, the chain differentiated itself from competitors such as fast-casuals like Chipotle and fast-food chains like Del Taco. El Pollo Loco went public last July, at a time when investors were hungry for restaurant concepts. While the chain's shares tumbled after a disappointing third quarter, in March the company reported total revenues increased almost 12 percent and same-store sales grew nearly 8 percent in the fourth quarter.

As El Pollo Loco tries to set itself apart from both fast-food and fast-casual chains, Gardea's job has become one that requires constantly brainstorming new ideas. She says her favorite creation is a shrimp and chorizo taco that's still in testing, but also admits she is biased because it's her most recent invention. El Pollo Loco tries to stay top of mind with customers by continually churning out new items; instead of launching a few items a year, as it once did, under Gardea's leadership the chain splits the year into 10 modules of about five weeks. In each module, El Pollo Loco introduces three to five new menu items.

The quick turnaround allows Gardea to constantly try out new products, not just in development but also by tracking sales during tests that can be as short as a few days. However, no matter how much customers like the food, if it's a limited time offering, it's off the menu after five weeks. Then, a new batch of items are revealed – with the potential to bring back favorites in the future.

When Gardea crafts new recipes, she focuses on differentiating El Pollo Loco from other fast-food chains while still keeping execution relatively simple. Her formula is to use chicken, or another protein like shrimp or carne asada, and then punch it up with unique additional ingredients and textures.

"I think that why fast food and other restaurants failed is that they're leaving that textural part out of it," she says. "When you eat a bowl of tomato soup, it can be delicious, but you'll be bored before it's over."

Related: 5 Tips on Pitching Your Food Concept to Investors

However, just because Gardea elevates El Pollo Loco above the typical fast-food chain, does not mean she's trying to turn the restaurant into the next trendy fast-casual joint.

"You'll find a kale salad at El Pollo Loco, but we'll use the fresh baby kale, because it's a little more of a safe exploration for our guests, because we have guests who have never had kale before," says Gardea. "If I give you kale, I'm still going to give you chicken, so you know what that is."

In other words, instead of banking on what's hip now, Gardea is following more overarching fast-food industry trends towards increasingly healthy and sustainable food. As customers know more about food, Gardea says, they demand changes that will affect all restaurant chains, from fast food to fine dining. It's no longer enough to offer low-calorie options. Today, customers want to know where their food is from and the process behind bringing it to the table. Within this movement, Gardea can play with constant new health crazes from high-protein to fiber obsessed in her frequent menu swaps, while never fully committing to one micro-trend.

"I think [fast food is] at a really interesting crossroads," says Gardea. "I think what's going to fight for them is that they're just so big. If Del Taco [or] McDonald's launch a product, I guarantee you, it's more than a year in development, in test, in product -- at least a year."

Meanwhile, with dozens of new menu items a year, El Pollo Loco has to stay nimble. The chain has 415 restaurants, more than half of which are franchised and most of which are in California. El Pollo Loco plans to open about 30 new locations in 2015, but is staying focused on the Southwest. At the end of the day, the ability to create a QSR-plus menu that is always serving up something new is something that El Pollo Loco can't afford to lose.

Related: Carl's Jr. Tests Pepperoni Pizza Fries, Which Are Exactly What They Sound Like