The Washington Post's Lillian Cunningham struck governmental gold with her podcast 'Presidential.' Here's how she did it and what's coming next.
Next Article

In January of 2016, Washington Post leadership editor Lillian Cunningham premiered the matter-of-factly titled podcast Presidential. The premise was simple and the expectations were humble: Every Sunday, up until Election Day, the hostess would post a profile of each of our nation’s 45 commander-in-chiefs in the order they were nominated.

It was a hit. An array of A-list commenters such as David McCullough and Bob Woodward, episode art featuring adorable president toy figurines and Cunningham’s signature “what would it be like to go on a blind date with President ____” query lead to 10 million hits and an Academy of Podcasters nomination for “Best News and Politics Podcast”.

How did this small idea score such massive success? Like most things, it started with a problem.

“In preparing for the upcoming election I tried to find a podcast on the U.S. presidents and found that there really wasn’t much out there,” said the 33-year-old writer. “So I decided to make one myself.”

Here's what Cunningham has to say about Presidential and her follow-up podcast Constitutional, which premieres this week.

Tell us what we can expect from Constitutional.

The idea came from a really powerful voicemail I got from a fan who really wanted a follow up to Presidential and really thought it should be about the Constitution. We decided we’re really going to focus on the people who have shaped it: delegates at the first Constitutional convention, suffragettes and abolitionists.

Presidential was all about power. Constitutional won’t always be about people in any positions of power. Our second episode focuses on native Americans. Specifically, Standing Bear, who, in the 19th century, was the first native American to argue his rights in a U.S. court room. 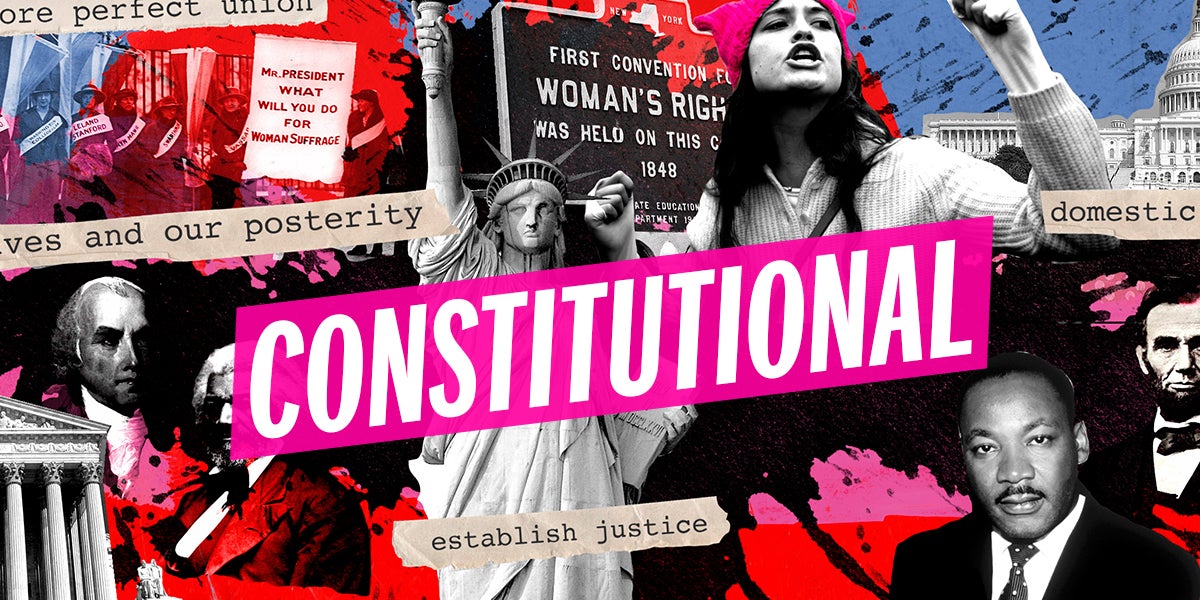 How did the higher-ups react to your success?

I don’t think anyone expected it to have the reach that it had. And so much of it was based on word of mouth. I’d get emails saying how they taught their moms how to subscribe to a podcast and I’d get letters from senior citizens thanking me for giving them a weekly thing to discuss on the phone with their kids and grandkids. A young military vet sent me a box of Presidential coasters that he’d needle-pointed. You could tell he spent a ton of time on them. He said the show helped him readjust to civilian life after coming back. And someone sent me a Teddy Roosevelt Bobble Head Doll.

Is that because you mentioned, in an interview, that out of all the commanders-in-chief, Teddy would be your number one blind date choice?

Ha, yeah. I can’t imagine being in a room with him. He was bursting with energy and had a zest for life.

And the president you’d least want to have a blind date with?

John Quincy Adams, by most accounts, was a very dry guy. He was fascinating and very noble. But I also think he would have no interest.

I figured you would’ve said James Buchanan -- he really wouldn’t have had any interest.

How did blind date line of questioning first come about?

It evolved. I spent a lot of time trying to make sure it didn’t come off as a history class. I needed a line of questioning that would help the listener better understand the presidents as people. I kept saying how I wish our guests could sort of describe them as one would a blind date. It was a lightbulb moment. So I did it with [the Library Of Congress’s] Julie Miller for the Washington episode. She had such a fun response and it really brought him to life. So I kept going with it.

Were you able to get a much-deserved raise after the podcast became a hit?

Uh … Azhar [WaPo’s senior publicist] is shaking her head saying I can’t answer that. Thank you for asking, though!

Pulitzer Prize-winning author Robert Caro got laryngitis right before he was scheduled to be on the Lyndon Johnson episode -- any other harrowing podcasting problems you've faced?

Yeah, definitely. That was the most public and dramatic one. I had announced Caro would be our big LBJ scholar for the show but he literally could not speak. It was a rough week. We ended up getting the director of the LBJ Library, which was great. The challenges of doing all of the recording and sound mixing was very new to me.

Oh my gosh, the audio would always mess up. I interviewed Robert Dallek for the JFK episode and my recorder died. I had to have him tell me a ton of amazing stories all over again. I try to be as authentically myself as I can in situations like that. The audio for my Doris Kearns Goodwin interview wasn’t great. She’s in the back of her car on the way to the airport, so we just admit that from the beginning.

Gore Vidal once said of our obsession with an office that’s not supposed to hold a king: “That peculiarly American religion, president-worship.” Is there something specific about our citizens that makes us so weirdly enthralled with our leaders?

That’s so interesting. We’re more obsessed with them now than we were. They were not meant to be figures that loom large over our country. In the 1800s the power was in Congress and the senators were political stars. That stopped around the time of Theodore Roosevelt. He was larger than life and the presidency took a new tone.

Please explain the corresponding president figurines that is the artwork for each episode. I love them.

I knew I didn’t want any dour looking oil paintings of the presidents. The figurines were my colleague, Amy King’s, idea. She scoured the internet for them and I think she ended up giving them to someone in her family after we shot them. But the toy company only made them up until Eisenhower. Then this is great: A former producer at Futurama, Patrick Verrone, is obsessed with these figurines. And he had made his own presidents that followed Dwight! So we shot those. He even made us Trump and Hillary ones so we were ready for either outcome.

Related: 4 Simple Strategies to Turn Your Passion Into a Paycheck

Any words of wisdom for people who want to try podcasting?

My big piece of advice is to make sure you pick a topic you love -- not one that you’re doing just because you think it could be popular. It takes an enormous amount of work to make and sustain a podcast, so it’s crucial that the subject continues to excite you. I also believe that a host’s genuine enthusiasm is what attracts listeners to a show. I think obscure topics, explored with passion, have a better chance at success than “popular” topics explored half-heartedly.

These 5 Things Will Make or Break Your Podcast

How Audio Is Changing the Game and the Future of Podcasting

6 Reasons Why Podcast Guesting Is An Untapped Marketing Tool

I Changed My Brand's Name. It Was Scary But Worth It.