I 'Hot Desked' for a Week, Switching Desks Each Day. Here Were the Two Big Benefits.

“Hot desking” is not nearly as steamy as it sounds. Think back to your school days, where they weren't any assigned desks in a classroom, and you had a different seat each day. It serves as a prescription for when there aren’t enough desks to go around and also a way for employees to get to know each other.

The office concept has been embraced by some big names in business, such as consulting firm Deloitte as well as Microsoft.

Smaller businesses, such as Apt MarketingSolutions in San Jose, Calif., also employ hot desking. CEO Curtis Thornhill tells me that his employees have a range of work spaces to select from -- private desks, couches, stools along a bar and a conference area around a table. But it’s not a total free-for-all. Thornhill has an assigned desk. Plus there are implied assigned desks where the developers and analysts with specific hardware needs sit, he says.

Marketing agency eReach, in San Diego, employs hot desking, too. Chief executive Myles Vives says that a few of the benefits he noticed about not having a fixed desk is that it discourages work cliques and gets people to focus more on their work and results. Another benefit for managers is that it allows them to move through the office to get a better feel for employee morale, issues and challenges -- and who is a good fit for remote working.

The fluid-desk situation is not only good for promoting relationships between employees. According to Ginger Jones, CEO of Jones Therapy Services in Tennessee, the hot desking model allows her 61 employees who work between seven different offices to move between locations and provide services to a larger area of the market.

For me, hot desking is an intriguing model. I consider myself easily distracted -- or at least I find it hard to focus around environmental stimuli -- something that can’t be avoided in an open space work environment such as the Entrepreneur office in New York City. So I’m always on the hunt for ways to aid my productivity and focus.

I work in a fixed desk environment and sit somewhat secluded at the end of a row of desks with partitions. In my mind, this arrangement lends me a certain amount of privacy and also provides me the ability to focus by way of deprivation of visual stimuli. I wondered how I would fare in terms of focus next to new deskmates in areas of higher and lower foot traffic.

I was also curious about interacting with different people outside my immediate circle. Who and what am I missing out on by sitting at an assigned desk?

There was only one way to find out: I gave hot desking a whirl for a week. Here’s how it went down.

Related: 7 Simple Tips to Boost Your Productivity at Work 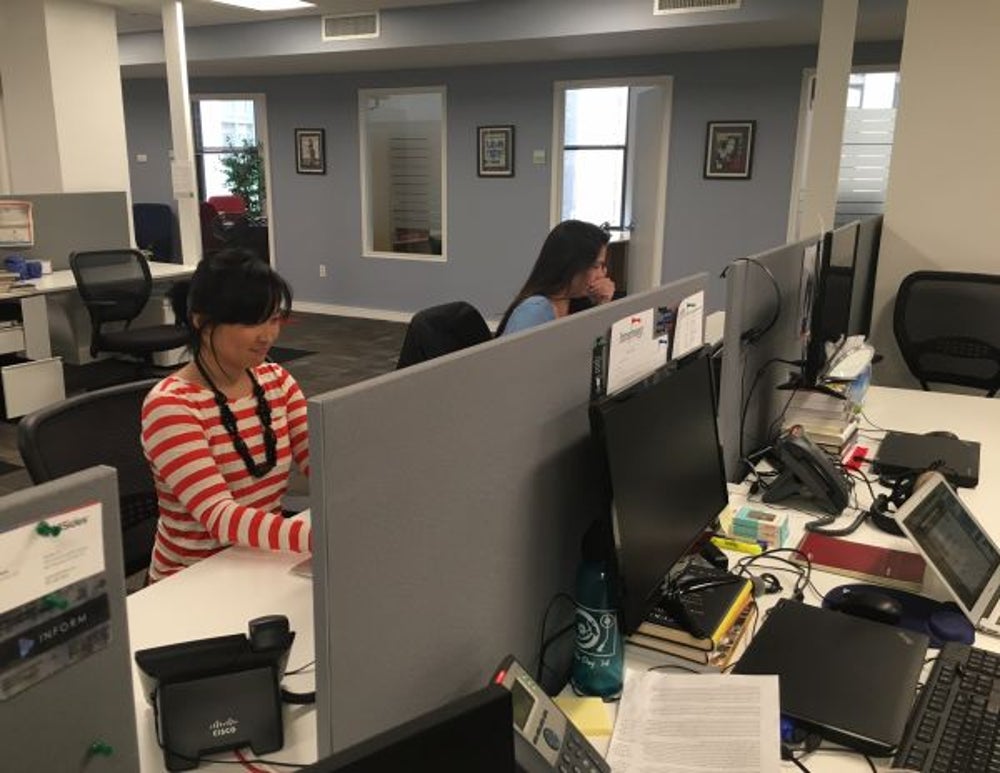 Hot desking requires you to travel with baggage, depending on what tools you feel you need for your work day. Some places, such as Deloitte in Amsterdam, offer lockers for employees to store their belongings. I don’t have a locker, and for the purposes of this experiment, didn't use my assigned desk as a storage space. Every day, I toted my purse, laptop, chia seeds, pumpkin seed granola, a 44 oz. bottle of raw unfiltered honey, BPA-free plastic water bottle and cough drops to each new location.

One of the new people I’d sat near was Andrea Hardalo, the social media editor who’d started a few weeks prior. Two things I noticed after moving my seat. She could actually hear me if I chose to speak to her at random, because she doesn’t wear headphones when she’s working. (My neighbor at my fixed desk, associate editor Erin Schultz, wears headphones and can never hear me when I talk to her without flagging her attention.)

I was able to ask Andrea about her prior work experience, which somehow transitioned into a conversation about how she used to play soccer in high school and our workout habits -- or lack thereof.

On a more productivity-related note, later in the day, my desk move made it easier for me to speak to associate editor Lydia Belanger, who was seated across from me. She’s relatively new to the office, too, and was editing one of my articles.

My new seating arrangement made it much easier for us to talk back and forth as she edited. Normally, we’d be accomplishing this over Gchat, email or with her making edits in the document and me addressing the notes after the fact. These methods also work, but I couldn’t help but notice how much quicker and more immediate the whole process felt by our talking face to face.

I still had to wear my headphones and listen to music to help me focus, but I found that my new location didn’t affect my productivity -- and actually may have helped it -- and I finished my assignments for the day. 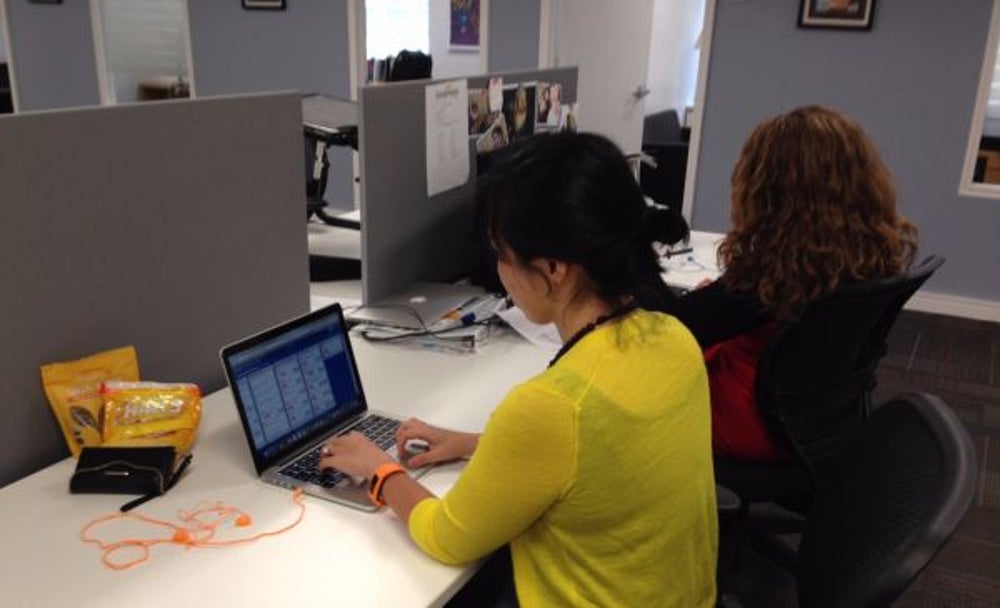 Emboldened by Day 1, I selected a new spot near three people, two of whom I talk to pretty regularly:

Across from my seat sat Nina Zipkin and Carly Okyle, two staffers I speak to pretty much every day, and Lindsay Friedman, a reporter who started a few months ago and is very outgoing.

Not surprisingly, I got drawn into more conversations than the day before. Knowing who are the talkers -- and your own tendency to talk -- should help you strategize who you sit next to when you’re hot desking. In spite of my wearing headphones, I found myself weighing in on Lindsay’s housing and roommate situation and give unsolicited advice.

One thing that I didn’t anticipate was how moving desks and working from my laptop would make a video assignment much harder. I normally use a large computer monitor at my assigned desk, and editing a video using my 13.1-inch laptop screen was a pain, and I wasn’t able to finish both the video and the article that day.

Takeaway: If you’re hot desking, make sure your equipment needs are met.

Related: 7 Simple Tips to Boost Your Productivity at Work 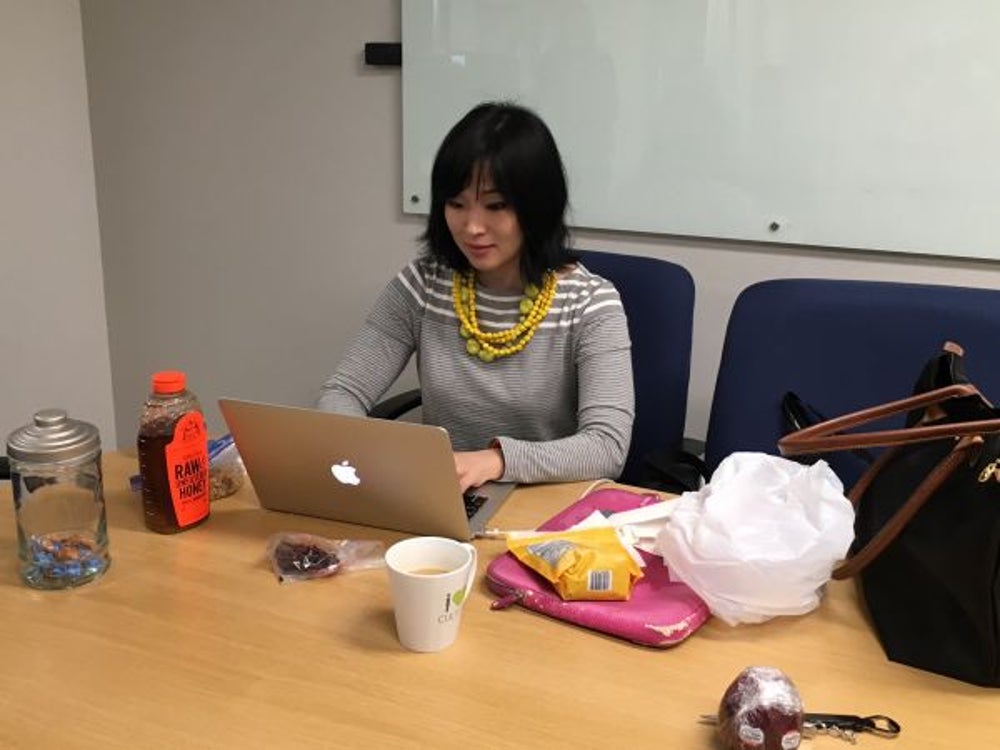 I sat in self-imposed solitude at a large conference table near the kitchen due to my lowered productivity the day before. The point was to sit alone. Also, I thought it would be an awesome experience, because the table is huge, and I could spread out all my things.

Given this location's proximity to the bathrooms, however, I should have realized how much foot traffic would pass back and forth in my line of sight. I struggled for two hours at that workstation, unable to concentrate with the parade of people passing on the way to the bathroom and with the sound of a door closing, even while wearing my headphones. So I had a relapse.

I went back to my assigned desk to finish the video assignment. This did not go unnoticed by my colleagues.

“What happened? I thought you were over there?” one of them said, pointing to where I’d been sitting.

“Hot desking is about not being attached to a fixed desk,” I said -- and then I had to confess to having to finish a video and wanting to use my desktop computer with its big monitor. (I did finish the video much faster using equipment better suited for the task.)

Takeaway: Don’t sit near highly trafficked areas if you have an urgent deadline. 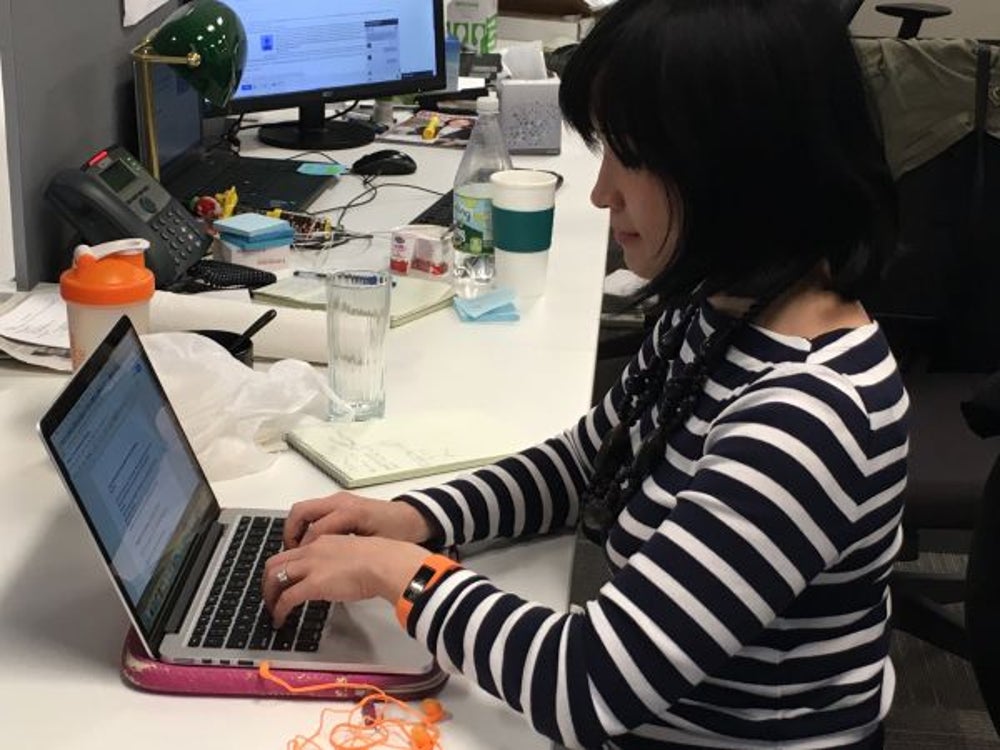 The next day, I was ready to be in the mix again and sat directly next to Carly, whom I’d sat across from two days earlier and who’d gotten engaged in the interim. I was also seated directly outside of managing editor Linda Lacina's office. Normally, my desk is far removed from her office.

I had a pretty productive work day. Carly uses headphones, like I do, so after I appropriately admired her engagement ring, we put on our headphones and worked in a companionable silence. 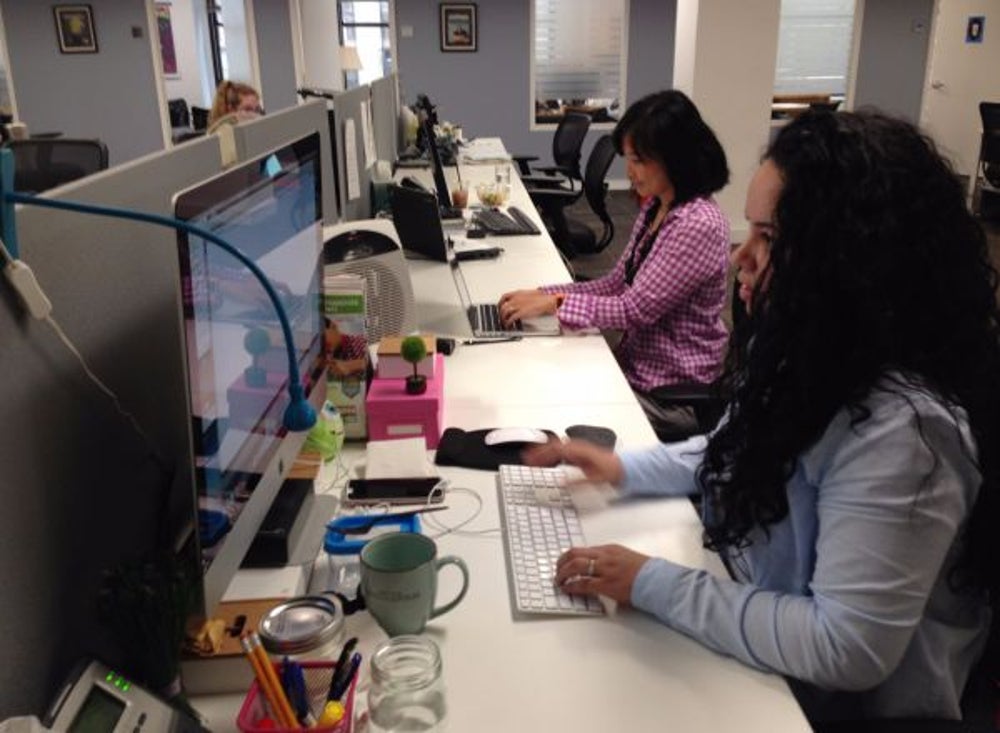 I sat next to Monica Dipres, one of the few people in the office who interacts with almost everyone, largely because she provides the majority of images for all of Entrepreneur's online content. Had I had an image-heavy project to work on, like I had a month ago when I was working with a lot of slideshows, our seating arrangement would have been particularly handy.

But that wasn’t the case. We both quickly settled into our routines, with headphones on and eyes straight ahead. I finished everything I needed to finish, and then some. 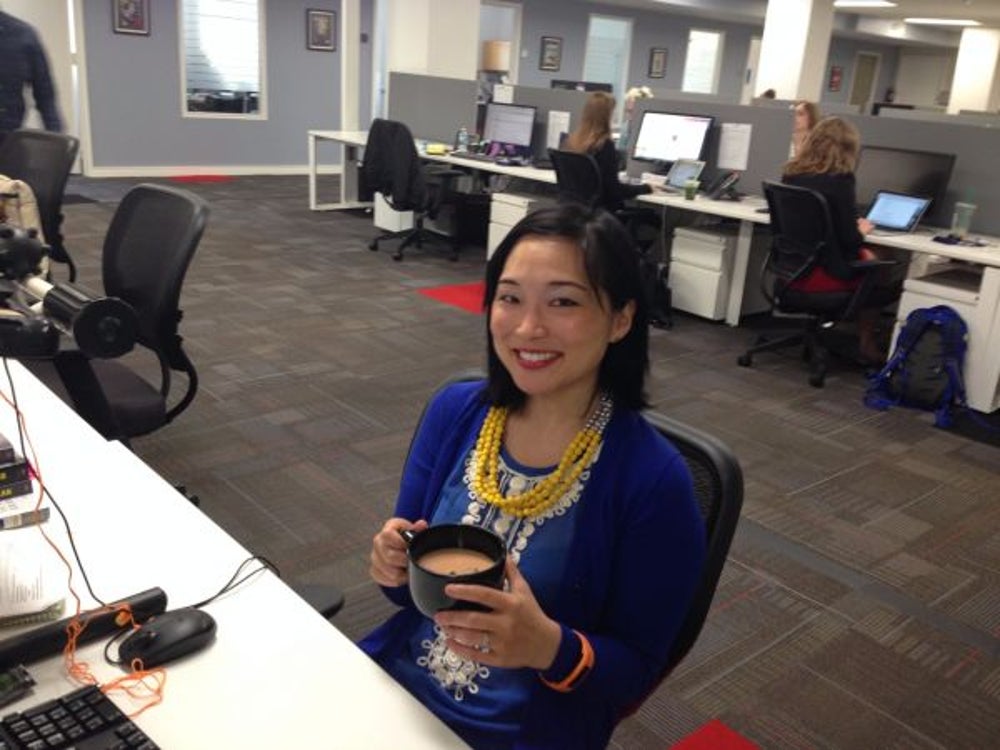 I can’t speak for Deloitte, but frankly I’m puzzled how hot desking is working out there.  (I reached out to the company but haven't heard back as of this time.) According to Business Insider, Deloitte's office in Amsterdam has 1,000 desks for its 2,500 employees. To manage hot desking in such a large company, there needs to be the technology in place to organize it.

As for me, some benefits I experienced off the bat? As someone who is hyper-concerned about productivity, I can forget the importance of slowing down and getting to know my fellow co-workers -- especially the newer ones -- beyond a superficial level. I definitely got more warm-and-fuzzy time with a wider group of colleagues, and I enjoyed it.

Also, it was beneficial to sit near someone whom I was working on a project with. It lead to faster communication and more time to do other things.

The obvious drawbacks? Productivity fluctuates. Changing desks is a disruption, and sometimes not in a good way. Also, schlepping all my stuff from desk to desk was inconvenient and took time. Plus, how is a sense of "team" forged if you're constantly switching your players?

My biggest takeaway is that hot desking is a work ideal that I admire but I don’t necessarily want to do on a longer-term basis. I like knowing my desk neighbors and giving them first pick on any snacks I bring in. While I appreciate the ideal of working from a cloud and being some kind of digital nomad, free from the chains of an assigned desk, like with many ideals, it doesn't seem practical.