To Celebrate National Hamburger Day, Here are 8 Franchises That Know How to Hit the Spot

Sometimes, all you need is a good hearty burger.

It’s juicy core, paired with fresh toppings and condiments, cooked at exactly the right temperature, with nice soft and fluffy buns just have a way of making the heart sing.

The recipe is not one all restaurants or franchises are always able to get right on the first try. In celebration of National Hamburger Day, we wanted to highlight some franchises that have figured out how to hit the spot in just the right way: 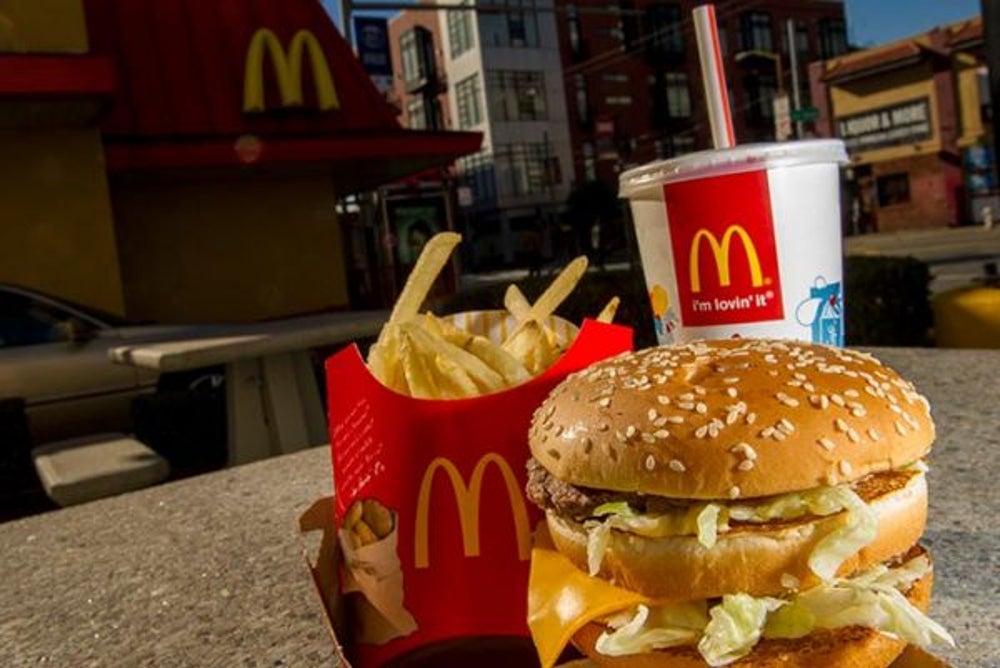 In the mood for a happy meal or a milkshake? Chances are you’ve probably stopped at McDonald’s once or twice.

As one of the largest fast food franchises in the world, McDonald’s has a humble beginning. In 1954, Ray Kroc, a milkshake mixer salesman, discovered a McDonald’s was using several mixers at once. Impressed, he suggested the restaurant, run by two brothers, start franchising, so he could sell even more milkshake makers.

Becoming a business partner, he opened the first McDonald’s as a franchisee in Des Plaines, Ill. in 1955.

Since then, the business has grown so vast that its golden arches are recognized all over the world. Its famous hamburgers, fries, chicken, breakfast items, salads and milkshakes have also earned the franchise the No. 6 spot on Entrepreneur’s Franchise 500 list. 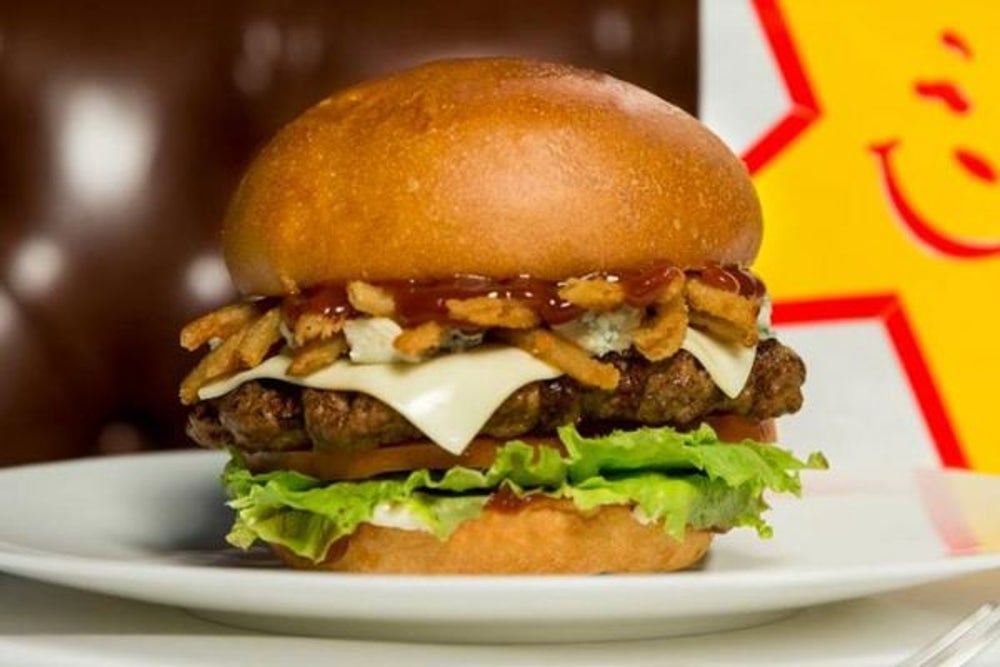 If you’re looking for a burger franchise guaranteed to have the basics, including a nice juicy burger, Hardee’s is the place.

Wilber Hardee opened the first Hardee’s in 1960 in Greenville, N.C. It only took a small amount of time for the restaurant to find success. Five months after the first restaurant opened, the business owner started his first franchise.

In 1997, the franchise was acquired by California-based CKE Restaurants Inc., franchisor of Carl's Jr. Restaurants. With more than 3,500 locations in 42 states, the franchise’s menu features biscuits, burgers and chicken has earned it a spot on Entrepreneur’s Franchise 500 list in the No. 12 position. 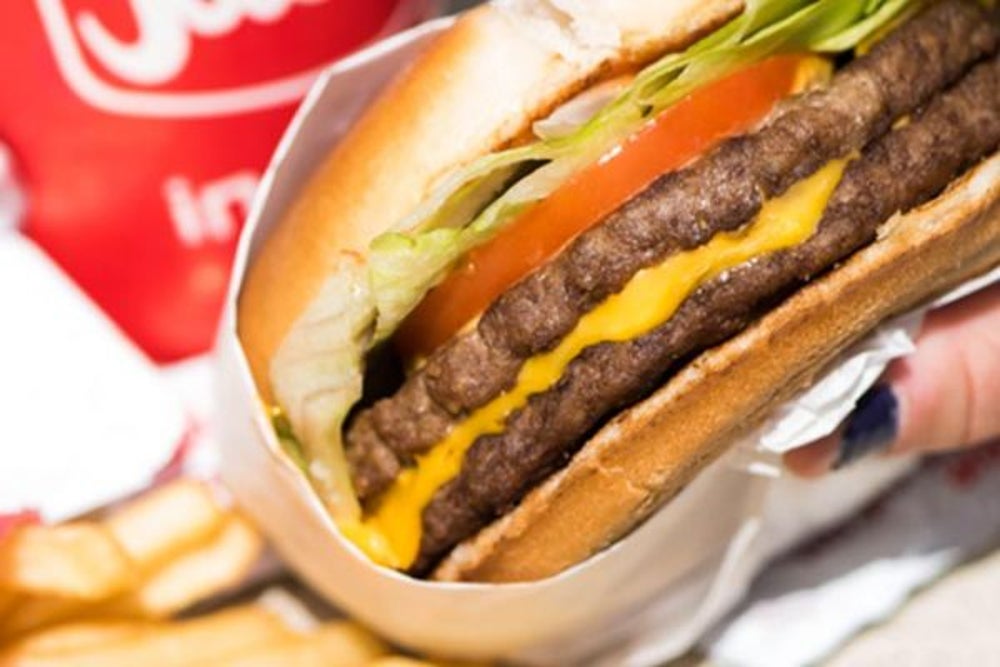 There’s few places you can get a good ole’ fashion burger, and Jack in the Box may be one of those places.

The restaurant got its start in San Diego in 1951 when Robert O. Peterson opened a drive-thru burger joint where burgers cost 18 cents. With an intercom-speaker system motorists would pick up their food, while a large jack-in-the-box clown watched over them from the roof. In 1960, he started to expand the company outside of the state, and in 1982 made Jack in the Box a franchise. 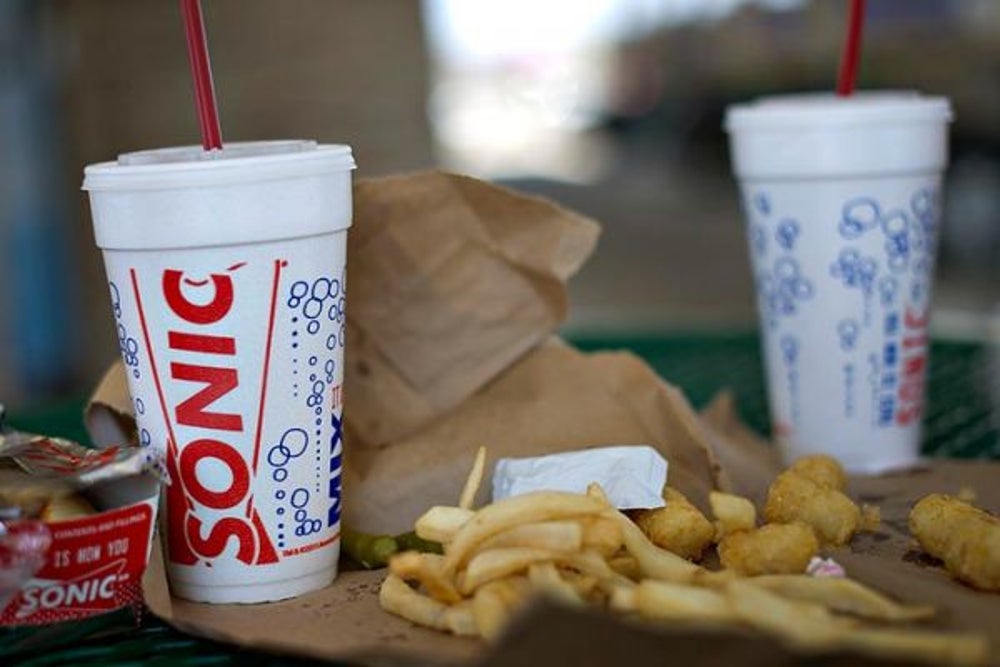 Are you a grab some Sonic and go type person? If so, you’re most likely a fan of the Sonic Drive-In restaurant concept.

Founded by Troy Smith Sr. in 1953, Sonic was originally a Top Hat Drive-In in Shawnee, Okla. In 1953, Smith implemented curbside speakers, allowing people to order their food from the comfort of the car. The restaurant used the tagline: “Service at the Speed of Sound,” which eventually got whittled down to one one: SONIC. Smith later teamed up with Charlie Pappe and started franchising with its current name in 1959. 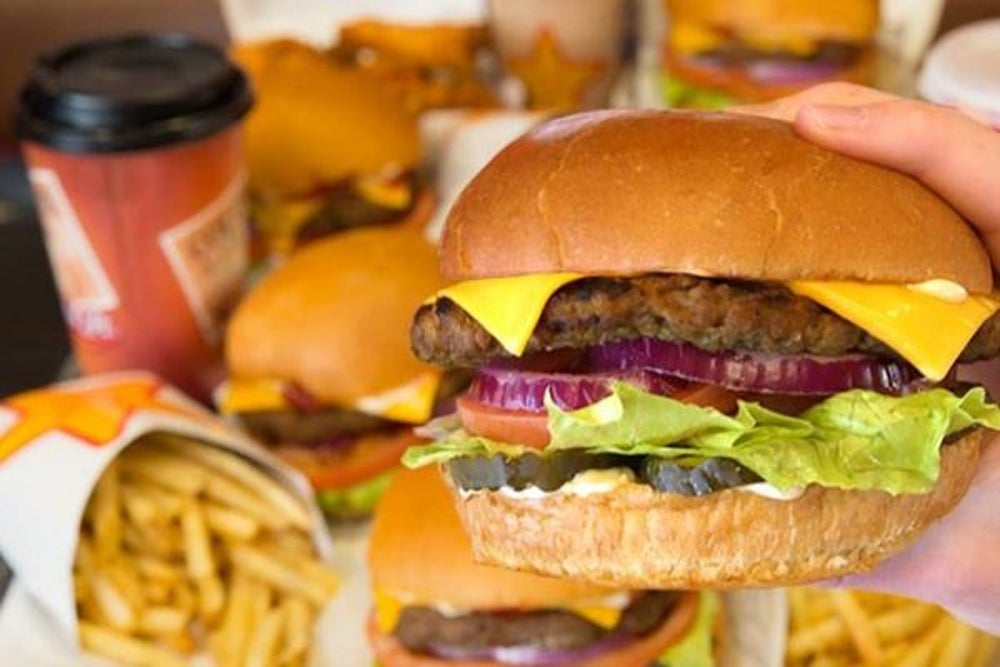 On a budget? Carl’s Jr. Restaurants can help ya out, especially since the restaurant was also started on a budget.

Once the business grew to include four carts, the couple decided to take their concept indoors, opening a full-fledged restaurant, Carl’s Drive-In Barbecue, in 1945. Thanks to the move, burgers were also added to the menu.

Carl’s Jr. Restaurants got their start in the 1950s, named as such because they were smaller than the original drive-ins. Now with more than 3,600 locations in 44 states and 36 countries and territories, the franchise is ranked as No. 54 on Entrepreneur's Franchise 500 list. 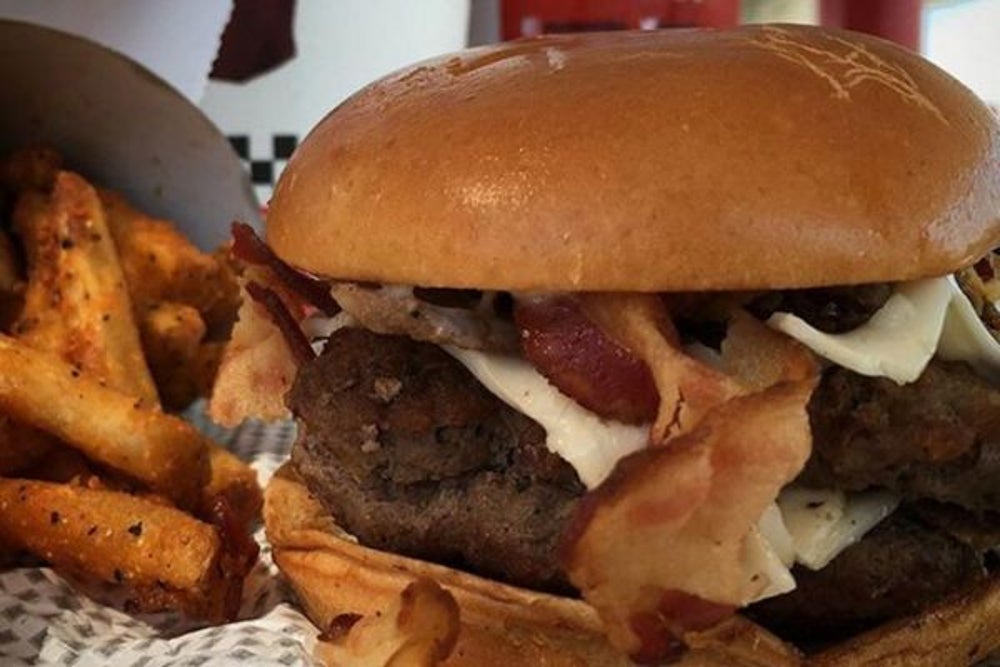 Franchises Checkers and Rally’s decided two heads are better than one.

So, in 1999, the two restaurant concepts converged under one brand, though they still operate as two separate restaurants.

Before the merge, Checkers got its start in Mobile, Ala. in 1986. and Rally’s a year before in Louisville, Ky. By the time the two joined forces, the entities adopted a single double drive-thru burger chain business format.

Offering not just burgers but also chicken, fish, and hot dogs, and with more than 800 locations, the franchise is ranked as No. 251 on Entrepreneur's Franchise 500 list. 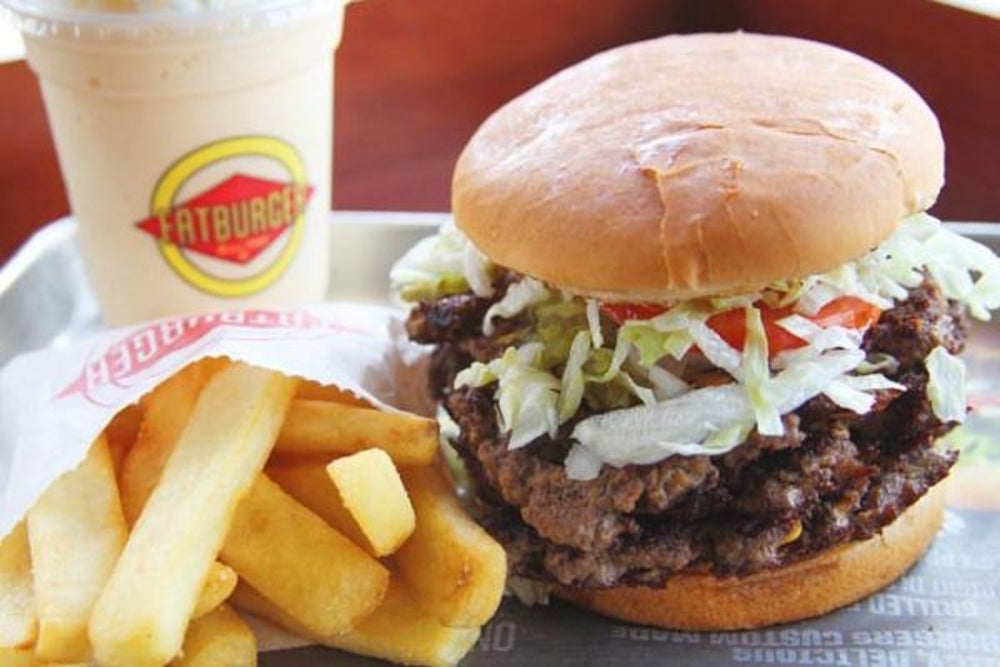 Though you may not actually get fat from eating just one, you certainly could after eating too many Fatburgers -- something not hard to do.

The first Fatburger, originally called Mr. Fatburger, was founded in 1947 by Lovie Yancey and a partner in Los Angeles. The three-stool hamburger stand offered fresh burgers, cooked to order. In 1952, Yancey parted ways with her partner and changed the name to just Fatburger. Today, it has expanded to include other menu items like sandwiches, salads, fries and onion rings.

Since it began franchising in 1990, the company has more than 200 locations and is ranked as No. 287 on Entrepreneur’s Franchise 500 list. 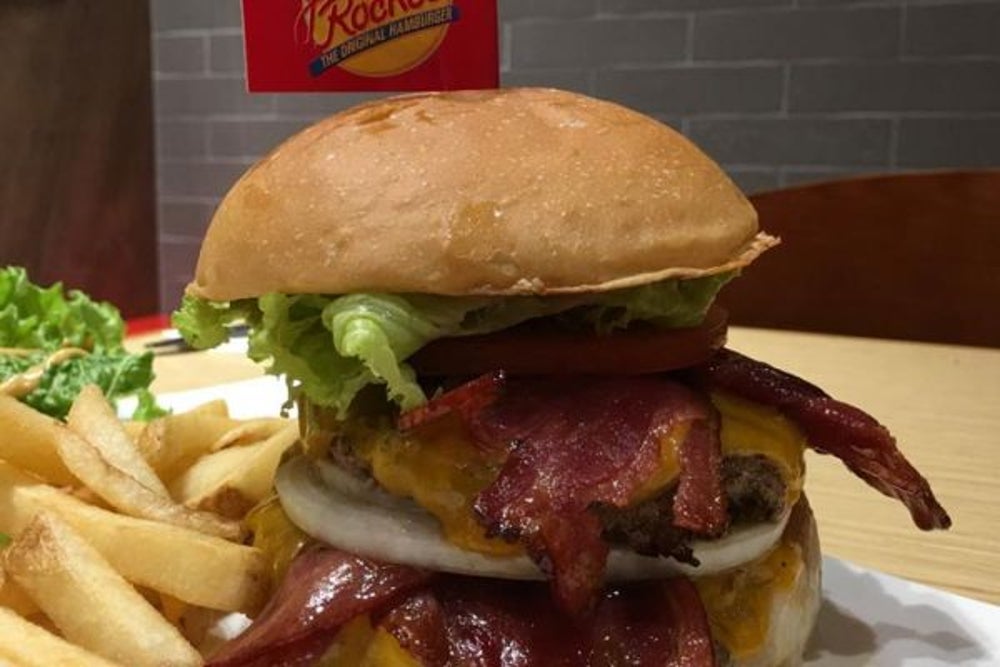 As the king of diners and that priceless retro experience, Johnny Rockets is the place to go.

Founded in 1986, it was the brainchild of  fashion retailer Ronn Teitelbaum in Los Angeles. His goal was to create a place where people wanted to come to escape the complications of the modern world, trading it in for a taste of classic Americana. He got the idea for the restaurant's name by conjoining the story of Johnny Appleseed with that of the Oldsmobile Rocket 88. Because, in his mind, the two are the exact depiction of classic America and the American dream.

The company itself has been franchising since 1987 and now has more than 340 locations worldwide. It is currently ranked No. 295 on Entrepreneur’s Franchise 500 list.