For National Frozen Yogurt Month, Get A Spoonful of These Tasty Franchises

During those sweltering summer months there are few things that can really help to keep the heat at a manageable level, one being frozen yogurt.

The revitalizing trend and affinity for frozen yogurt took center stage in the mid 2000s. Considered a healthier alternative to ice cream or other sweets, the market for frozen yogurt is on track to becoming a $9.3 billion industry by 2017.

For National Frozen Yogurt Month, here are a few frozen-yogurt franchises that can help to do it: 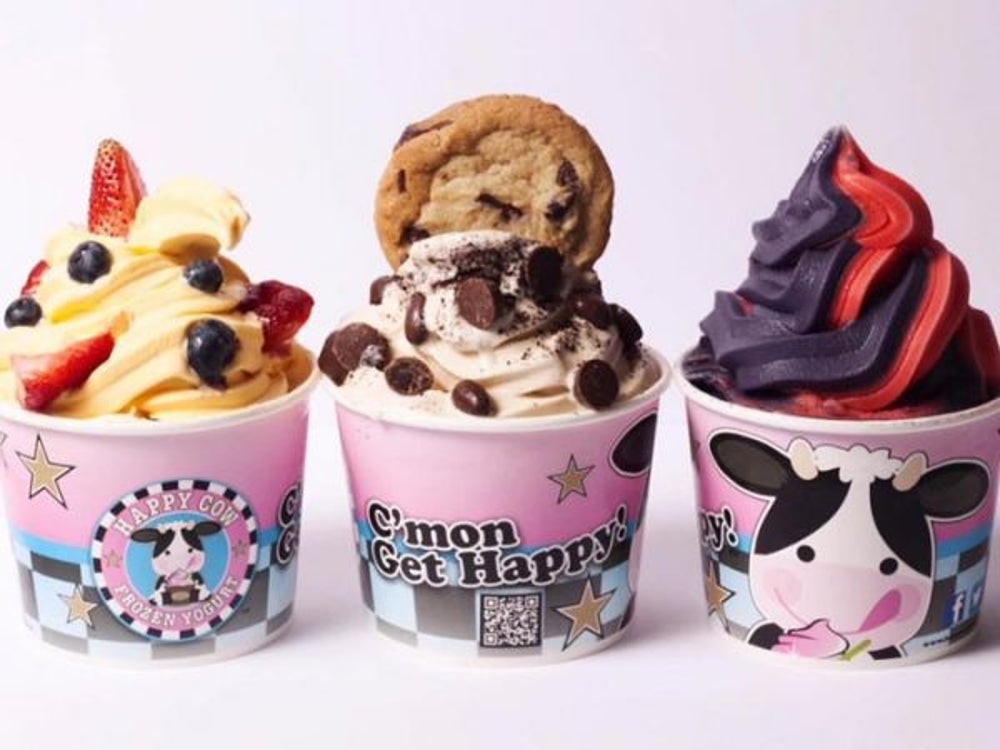 Cool down on a hot summer day with this franchise.

Founded in 2013 outside of Tampa, Fla., Happy Cow Frozen Yogurt got its start with “the principle that everyone deserves to be happy,” according to its website.

The froyo store offers a self-serving rotation of frozen yogurt, gelato, ice cream, sorbet and Italian ice. It also has 16 flavors -- including tastes like the original chocolate and vanilla --  and over 60 toppings and sauces to choose from. 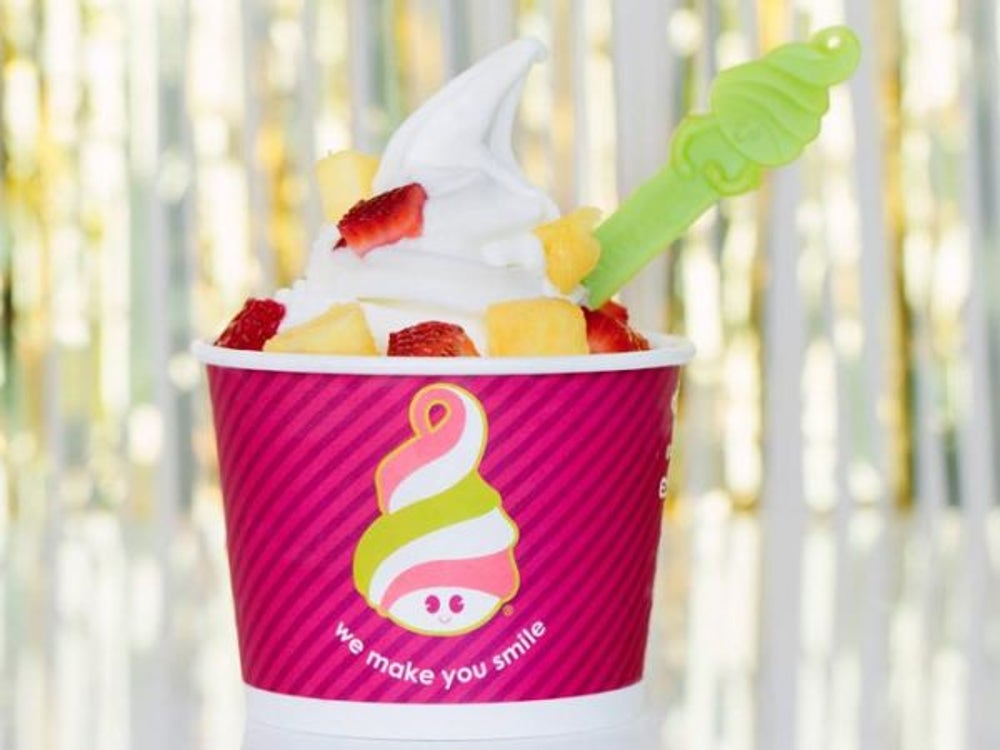 If you’re looking for a frozen yogurt place with a creative spin, Menchie’s is the place for you.

The name comes from a nickname co-founder Adam Caldwell gave his wife Danna, also a founder, when they were dating. However, Menchie, the character, was born when the couple opened their first store in Los Angeles in 2007.

As the story goes, the company’s logo and a cartoon character -- Menchie -- started mixing yogurt as just a baby and continued to cultivate his passion for mixing yogurts and toppings with his friends. Together, the franchise's cartoon characters make the United Flavors of Yumm and travel the world together in promoting the brand.

In reality, after it started franchising in 2008, Menchie’s expanded its brand to include shops all over the world. With self-serve froyo, the store has 100 rotating flavors including low-carb, no-sugar added, dairy-free, nonfat, gluten-free and kosher options. 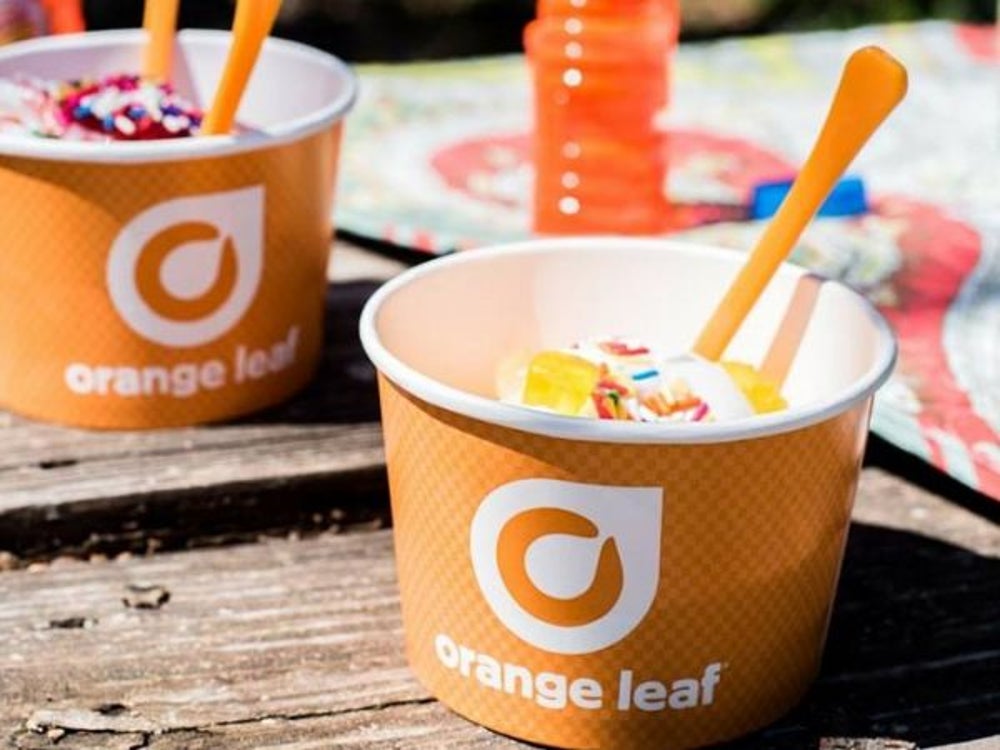 According to its website, the company sees the color orange as original, bold, different, bright, happy and a little bit weird.

“Everyone has a bit of orange in them,” the site reads. Which is why Orange Leaf’s goal is to inspire people to let their own orange out with its frozen yogurt, rotating flavors and topping bar.

The Oklahoma City-based company was founded in 2008 and has more than 300 locations in the United States. It’s also ranked as No. 125 on Entrepreneur’s Franchise 500 list. 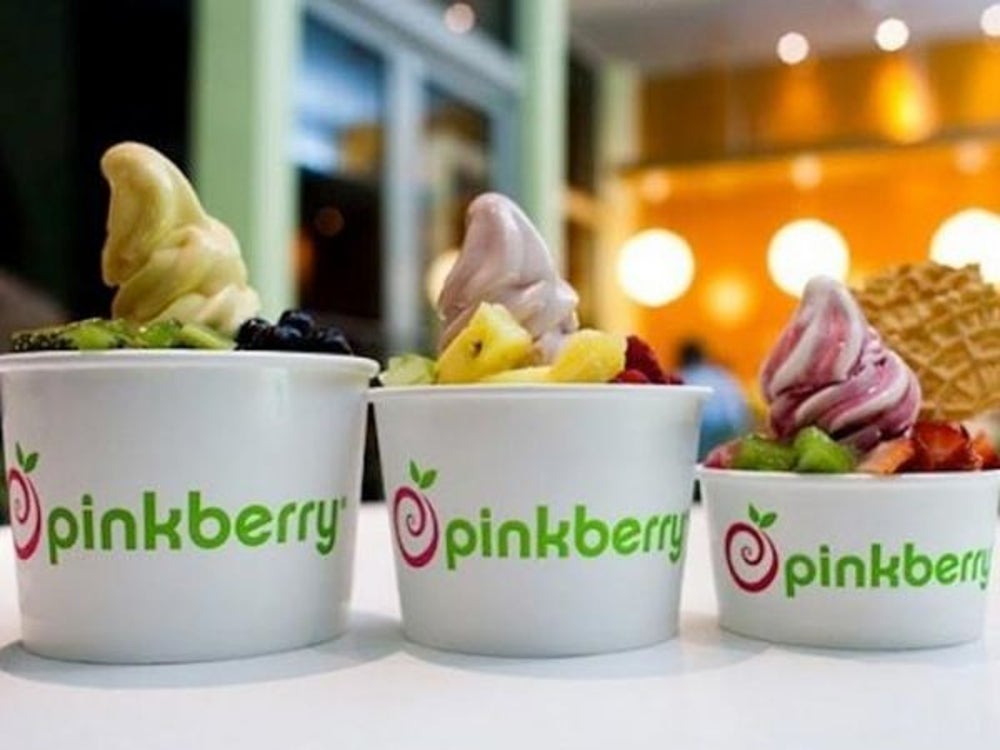 Looking for tart frozen yogurt? Well, Pinkberry’s got your back.

Founded in 2005, the Los Angeles-based company started franchising in 2006 and has since grown to 21 countries in 10 years. Its locations span from L.A. to New York City to Tokyo and even Istanbul.

The franchise, ranked No. 228 on Entrepreneur’s Franchise 500 list, prides itself on its offering of distinctive products, outstanding service and inspirational design. 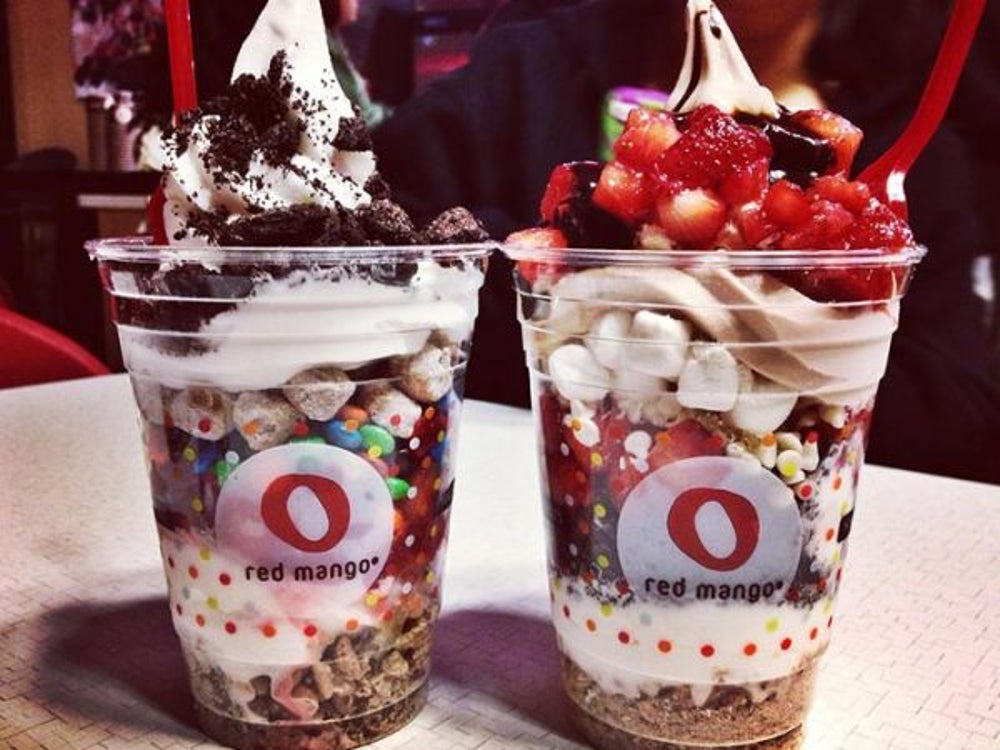 Red Mango got its start in the U.S. in 2007 near the University of California of Los Angeles.

But before making its way to the states, founder Dan Kim had set up shop in South Korea, opening 130 between the years of 2003 and 2007. This sort of growth caught the attention of Brix Holdings, a company that also has Souper Salad, RedBrick Pizza and Greenz in its portfolio. Brix Holdings acquired the rights to the Red Mango franchise in 2008 for the Western Hemisphere.

Now with nearly 200 locations in the U.S., the franchise’s menu features fruit smoothies, cold-squeezed juices, salads, wraps, all-natural frozen yogurts -- available in original tart or a rotating variety of other flavors -- and a variety of toppings such as fruit or nuts.

Today, Red Mango is ranked as No. 494 on Entrepreneur’s Franchise 500 list. 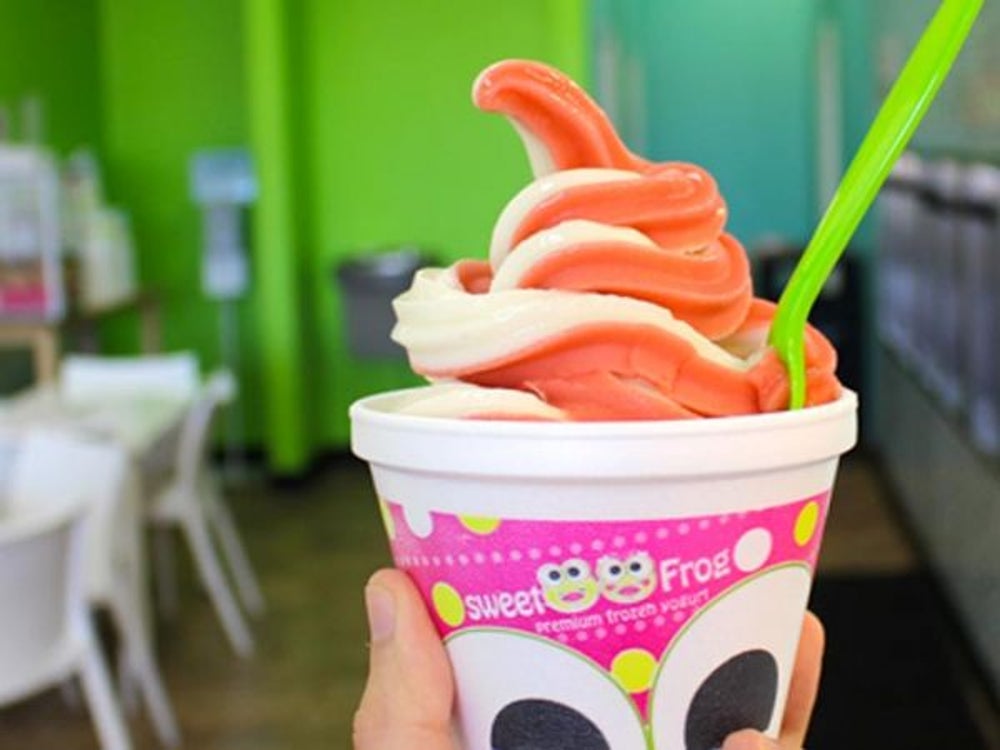 Hop from one delicious yogurt flavor to the next with sweetFrog and its mascots Scoop and Cookie.

The duo’s story begins in 2009, when sweetFrog opened its doors in Richmond, Va. after founder Derek Cha moved from the West Coast, bringing the valley’s frozen yogurt trend right along with him. It began franchising in 2012.

The F.R.O.G in the names stands for “Fully Rely On God,” which the franchise does in its effort to be a good neighbor and contribute to the community. 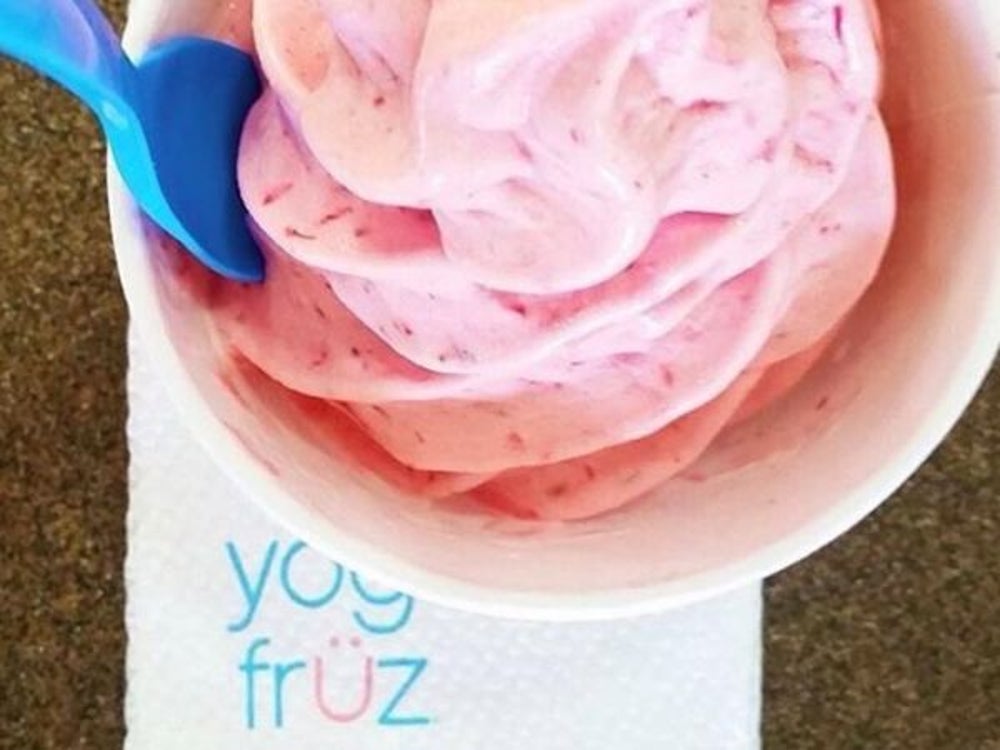 Simple and to the point is sometimes all it takes to get that taste of satisfaction.

The modest and humble approach is what helped two brothers -- Michael and Aaron Serruya -- start Yogen Fruz in Toronto in 1986. The first store was small but with great product and design. The idea was to offer consumers a healthy, experience rich with taste. 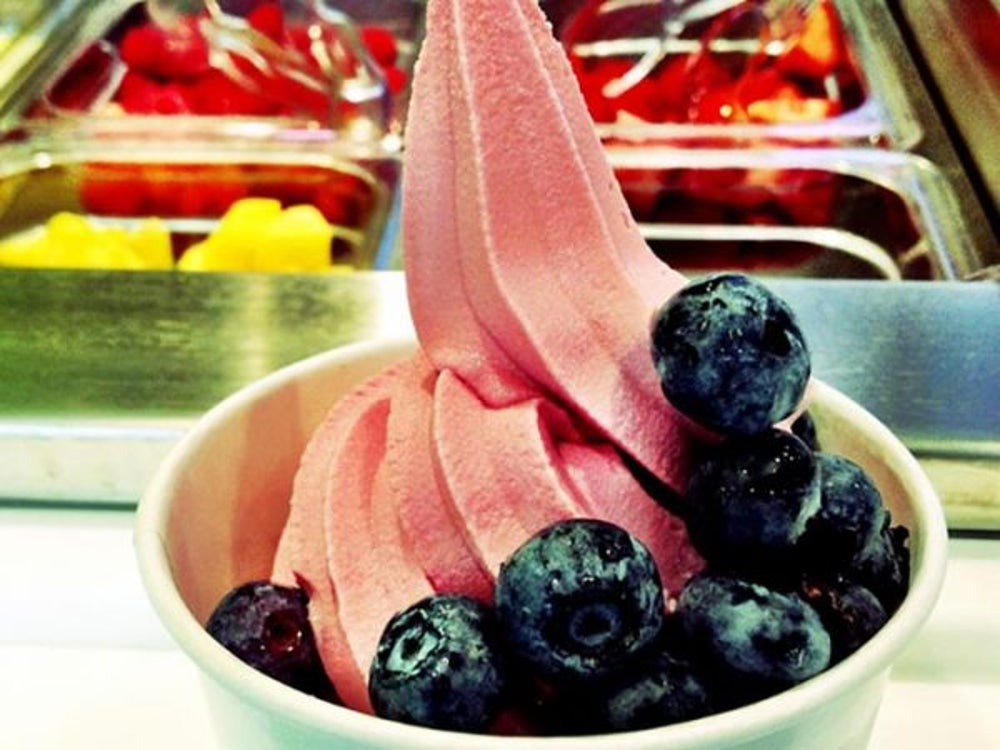 Want to fill your life cup with yogurt bursting with flavor and a positive can-do attitude?

So did entrepreneur Phillip Chang. He started Yogurtland, offering a variety of frozen yogurt, in 2006 and started franchising just a year later. The franchise comes complete with its own “flavorologists” who research, taste and adjust, to come up with the best flavors -- like salted caramel pecan and banana foster.

As a result, the franchise has more than 260 locations in the U.S., 16 flavors served daily and 33 different toppings to choose from. It’s also listed as No. 173 on Entrepreneur’s Franchise 500 list.